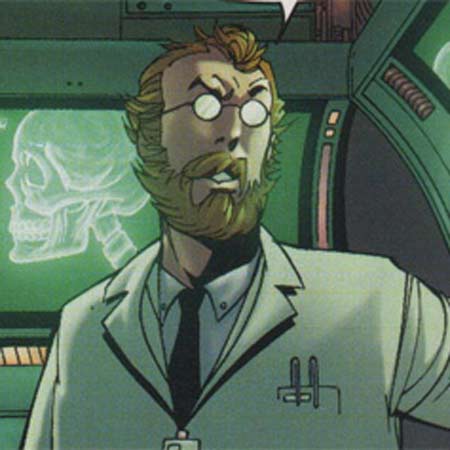 Abraham Cornelius is a fictional character appearing in American comic books published by Marvel comics. He made a cameo appearance in animated series Hulk VS Wolverine where he conducted experiments on Wolverine during the adamantium bonding process.

The senior scientist for Weapon X, Dr.Cornelius is employed by a professor Andre Thorton. He is partnered with a young Dr. Carol Hines. After the World War II, Wolverine is taken away by the project. He was assigned with a duty of perfecting and using a new technique which would bond the adamantium to human bone cells.

The process of adamantium-bonding was first created by Lord Dark Wind, the father of Lady Deathstroke. But the process was only used by Cornelius after perfecting it and successfully in bonding Logan’s skeleton with adamantium.

After several years the Japanese crime lord Matsu’ o Tsurayaba and his allies including former Weapon X scientist Doctor Cornelius, resurrect Omega-Red, the Russian super-soldier. In order to use his power, Omega Red needs the Carbonadium Synthesizer. However, Carbonadium Synthesizer was stolen from Cornelius by Team X decades ago.

Further, Omega Red captures Wolverine, who has the location of the Carbonadium Synthesizer buried in his memory and numerous of Wolverine’s teammates in the X-Men. In order to prevent Omega Red from obtaining the device, the former Team X liaison Major Arthur Barrington hired Maverick. He tracks another former Team X member, Sabretooth, to Omega Red’s location.

Along with Maverick’s help, the X-Men were able to defeat the villains. Later Cornelius is killed by Maverick in the final confrontation between Wolverine and the Hand.

Moreover, during the Death Of Wolverine, Cornelius is revealed to have survived from X-Men’s attacks. He is now isolated from the world and works at another laboratory facility named “Paradise”.  Cornelius seems to have an unlimited amount of money. He collects everyone who has adamantium and hired many mercenaries to bring nack Wolverine alive.

Later Wolverine tracks down Cornelius and after defeating his latest weapon, Wolverine struck Cornelius fatally with glass. However, escaping from him, Cornelius started a process that would inject adamantium into his test-subjects. Wolverine saved the test- subjects but seemingly died in the process. As for Cornelius, the wounds from the glass kills him as he bled to death.

Here, Dr. Cornelius along with his benefactor, Colonel John Wraith heads up the Weapon X program. During the Gulf War, the program is functioned by S.H.I.E.L.D. After Wolverines run away Weapon X captures numerous other mutants to be his replacements. He augments Beast’s natural ability and gives him a keen sense of smell. This results Beast to transform more by growing blue fur all over his body. After Wrath is killed by Nick Fury, the S.H.I.E.L.D. shut down the Weapon X program and Cornelius disappears.

Later on, he recruits Lady Deathstrike and gives her a chance to take revenge against Storm who was responsible for her present condition. He provides her with Wolverine’s DNA which gives here double the healing factor of Wolverine and he also bonds her with adamantium. Moreover, Cornelius’s true objective is to capture Wolverine who was tagging along with Storm at the time. However, his plan fails and is left presumably dead after his helicopter crashed.

It was revealed that Cornelius survived the crash but was left horribly disfigured. Moreover, he is responsible for Sabretooth’s latest attack on Wolverine to gain tissue sample. The attack is successful and Cornelius is then shown planning to use the flesh to clone a more obedient Wolverine.