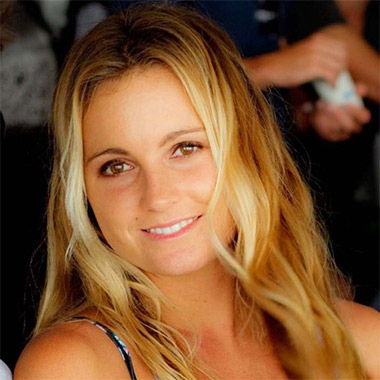 Alana Blanchard is a sexy and gorgeous American professional surfer and a bikini model. She also designs and modelled for Rip Curl swimwear, a line of wetsuits for surfing

She was born on March 5, 1990, in Kauai, Hawaii, United States. Her birth name is Alana Rene Blanchard. Her father name is Holt Blanchard. She and her father both are friends of Bethany Hamilton, fellow surfer. Bethany and Blanchard, both are best friends. During early days, Bethany lost her arm because of a shark attack. Based on Bethany shark incident, a film Soul Surfer was released in 2011; it was played by actress Lorraine Nicholson.

This sexy surfer has surfed on the ASP World Tour. She also has designed as well as modelled for Rip Curl swimwear. Rip Curl swimwear is a line of wetsuits specifically for surfing. She is also famous with her nickname Lana. When she was four years old, she started surfing under the guidance of her father. Her father personally taught her how to surf. She began joining several competitions when she was nine.

“I try to change it up as much as I can. It just depends on where I am. Sometimes even jumping rope and doing some lunges or doing a workout on the beach can be fun and hard.”

Alana Blanchard , who is a vegan is in a relationship with Australian pro surfer Jack Freestone. She and her boyfriend are often seen in public places and some rumored that they are soon to be married. As of 2016, Blanchard’s net worth is $ 2 million dollars.

She is fit and have an attractive body and does different types of exercise to maintain her body well. She starts her morning doing Yoga or Pilates. Talking about her hobbies, she loves bike riding. She also enjoys swimming. She also likes making new friends. She weighs 54 kg which is a normal weight. She has got beautiful brown eyes. She has dyed her hair in blonde color.

She belongs to a white ethnic background. Her zodiac sign is Pisces. She also has her own TV Show called as Surfer Girl. Her show shows her life as a model and surfer. She has sponsored for Spy Optic, Go Pro cameras, Rip Curls clothing and wetsuits, Rockstar energy drinks and Reef footwears. Since she was 14-15 years old, she did modelling for Rip Curls. She most of the time does surfing and train in Hanalei Bay. She considers Hanalei Bay as her favorite.