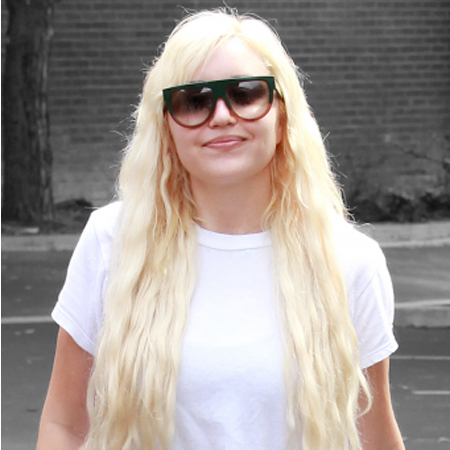 Amanda Bynes is a former American fashion designer and actress. She rose to fame after appearing on the Nickelodeon series, The Amanda Show and All That. Earlier, she ran a clothing line that used for sale throughout the world. Eventually, she left it because of mental illness.

Amanda Bynes dated several men. The last known person that she dated is Scott Mescudi, an American recording artist, and rapper. Amanda is living a single life at the moment and has avoided being in the relationship. She might be looking for the right partner and we hope she gets married soon.

Amanda Bynes was born on 3rd April 1986, in Thousand Oaks, California. She is the youngest daughter of three children of a dentist father, Rick Bynes, and office manager mother, Lynn Bynes.

Bynes started acting since her early age of seven. In the beginning, she appeared in the Nestle’s candy commercial before making the television series debut in 1996, All That. With her amazing comedy skills, she then began her own skit based series, The Amanda Show which displayed for only three seasons. She got Nickelodeon Kids Choice Awards for the show.

Later in 2002, Amanda made a movie appearance as a role of Kaylee in Big Fat Liars. A year after that, she did voice over for the movie Charlotte’s Web 2: Wilbur’s Great Adventure. She appeared in consecutive numbers of television series and movies. Besides that, she studied fashion design at the Fashion Institute of Designing & Merchandising and also ran a clothing line.

Everything was going great for her but suddenly things went wrong. According to sources, Amanda was found starting a fire in the driveway of a stranger. Moreover, she was arrested for possession of marijuana and DUI charges. Apparently, the reason behind Bynes’ immoral behavior was actually found to be mental illness.

Currently, Amanda is fighting with her illness and her fans are wishing for her recovery. In June 2017, she stated that she wanted to return to acting in coming days but only in television.

Aged 31, gorgeous actress, Amanda has been in a relationship with several men. She first dated an American actor, Drake Bell in 1999. However, the couple separated after being together for two years.

After Drake, she dated American actor Taran Killam in 2001. Eventually, they broke up after dating for a year. Following the breakup, she dated series of American actors such as Frankie Muniz, Nick Zano, Chris Carmack, Seth MacFarlane, and Doug Reinhardt.

Furthermore, the last known person that she dated is Scott Mescudi, an American recording artist, and rapper. Amanda is living a single life at the moment and has avoided being in the relationship. She might be looking for the right partner and we hope she gets married soon.

Amanda Bynes collected a great amount of money from her successful television shows, movies, and a fashion designing career. She made her first acting career debut in the Buncha Crunch candies advertisement.

Having a passion for an acting, later on, she appeared on multiple films such as Big Fat Liar, Robots Hairspray etc. Likewise, her television show includes All That, The Amanda Show, What I Like About You and so on.

The beautiful and talented actress, Amanda also received multiple awards for her incredible onscreen talent. Some of her awards are

These awards have helped her to boost her net worth. Analysing her economic status, she owns Calabasas estate and Black BMW X5 which value $1,880,000 and $95,000 respectively. Allocating information from several sources as of 2018, it is found out that Amanda Bynes current estimated net worth is around $5.7 million.