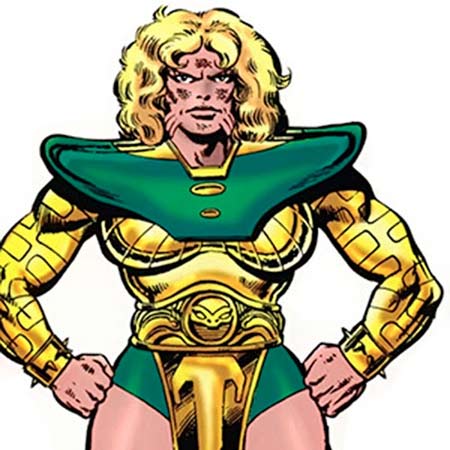 Anaconda is a fictional supervillain featuring in American comic books published by Marvel Comics. Her real name is Blanche Sitznski. She has been associated with the Serpent Society as a foe of Captain America. Due to her powerful, adamantium enhanced arms, she was given the codename Anaconda. Further, she was given superhuman abilities by the Roxxon corporation.

Anaconda was first featured in the Serpent Squad and later became a core member of Sidewinder’s Serpent Squad. The character was created by Mark Gruenwald and Ralph Macchio and first appeared in Marvel Two-in-one #69 in June 1980.

Anaconda has a superhuman ability to lengthen her limbs and constrict her opponents. Her legs and arms can elongate to about one and a half time their normal length. Her muscles engorge with blood giving the appearance of massive, snake-like limbs.

Once Ananconda has entwined her limbs around a human size foe, only a few humans can be able to break free of her grip. She has gills which allow her even to breathe underwater and modified lungs which allows her to extract oxygen from water. Due to all these, Anaconda has huge abilities and can even heal non-fatal wounds several times faster than normal human beings. She is an excellent swimmer and also has enhanced strength.

Anaconda’s entire skeletal structure is laced with an adamantium alloy-based substance which increases her durability. She uses street-fighting techniques to accommodate her elongating arms.

Blondie Sitznski was born in Pittsburg, Pennsylvania. She worked as a steelworker before the executives at the Roxxon Oil Company selected her to become a special agent in covert operations. She was already well adjusted to villainy as she gave training to several women in hand to hand combat in criminal trainer Taskmaster’s Academy.

Eventually, she was taken to Roxxon’s Mutagenic Laboratory and was bioengineered by Roxxon’s Mutagenic Division to have several permanent serpentine features. Although her trade feature is blonde hair, she was originally a brunette. She is fond of listening show tunes and particularly loves “Thoroughly Modern Millie”.

As a part of the second Serpent Squad, she grouped with three other snake-themed villains named Death Adder, Sidewinder and Black Mamba. All three of them were given the task to retrieve the Serpent Crown for the Roxxon Company president, Hugh Jones. The group came into conflict during the mission along with Fantastic Four’s Thing, the Inhuman Triton, and Stingray. She battled the thing eagerly and defeated him with ease. Anaconda was able to find the crown but Triton rescued the Thing and together they trapped the serpent squad underwater. However, Sidewinder was able to escape and completed the mission.

Anaconda freed herself and her teammates from the underwater captivity using her full strength and then all of the teammates were sent to another mission- to search for a powerful weapon named as the Micro-Scanner. Anaconda and the others were then defeated and taken to prison after battling with the Iron Man. They escaped and sought out Sidewinder for the payment from their first mission together. Anaconda was offered to join his criminal organization, the Serpent Society promising more money and she hesitantly accepted the offer.

Sidewinder organized a meeting and grouped Anaconda with Cobra and Rattle for the mission to steal equipment from the bankrupt Brand Corporation. Constrictor, not being pleased with the idea of the Serpent Society, alerted the Avengers of the Serpent Society’s action. Captain America interrupted their heist but Anaconda ordered Rattle and Cobra to leave with the apparatus. During an intense battle with the Avenger, Anaconda was able to raise her arms and wrap it around Captain America. Then, she started to crush his bones. However, she was taken to jail after one well-placed hit of his shield knocked her out.

Scourge of the Underworld

After Sidewinder teleported Anaconda out of jail, she paid a visit to Constrictor beating him to near death. Moreover, she participated in the mission to murder M.O.D.O.K but was again knocked out with a mind-blast early in the flight. Nevertheless, her teammates Death Adder and Cottonmouth were able to kill him before Captain America could intervene. Ananconda carried his corpse to A.I.M. for a large amount of profit they were promised.

After Anaconda’s best friend, Death Adder was soon murdered by the Scourage of the Underworld. She vowed to find his murderer and was ready to take revenge against the murderer. However, she never found out that Scourage was the one who killed her best friend. When Viper invaded the Serpent Society, she willingly switched sides, betraying Sidewinder and fought against Diamondback when she brought D-Man and Captain America for help. Anaconda was then defeated by Diamondback’s acid-tipped diamonds.

Then Cobra took over the leadership of Serpent Society.  Anaconda and Cobra had a mutual respect for each other having worked together on several missions at past. She assisted Serpent society on a mission against the X-Men and fought Colossus. She also took time out to help Diamondback’s date run smoothly unknown to the truth that she was dating her nemesis Captain America. After discovering that Diamondback was dating Captain America, Anaconda turned back on her friend. She served as the bailiff at the time of Diamondback’s trial and was voted guilty. Anaconda battled Captain America after the trial.

Eventually, Anaconda became romantically involved with a new recruit named Puff Adder. The two along with Rock Python were sent to retrieve Diamondback who had escaped her death sentence. They crashed the serpent Saucer in Diamondback’s apartment where Diamondback, Black Mamba, and Asp were hiding out.

Anaconda easily took the girls out but their kidnapping attempt was interrupted by the invitation to join the Femizons, all female villain group. She caused quite a ruckus with the villainess Quicksand while on the Superia’s ship. She also fought against Captain America and Paladin when they invaded the ship. She later fled when the Femizons disbanded. She joined the Serpent Society again. Anacondo battled against Jack Flag who attempted to join the group as a replacement for retired Cobra. However, Force Works put an end to the battle.

Anaconda also participated in the Bloodspot tournament in the hope of winning money and easily took out her first opponent named Forearm. While fighting against her second opponent, Puma, Anaconda got her neck slit. However, she survived due to her quick healing ability and returned back to the Serpent Society for her mission to exact revenge on Diamondback.

Anaconda then joined S.H.I.E.L.D’s new espionage team entitled Six Pack. Along with Domino, Solo, and Constrictor, she joined forces with Cable who was trying to create a sanctuary with his newfound powers, betraying the Six Packs. She saved Cable’s life by grabbing onto him before he got sucked into a techno-organic virus while being warped into Cable’s mind. Then she continued her work with the Six Pack which now included Deadpool and committed acts of terrorism in Rumekistan to decrease Cable’s reputation. Cable took revenge on the Six Pack by defeating them all and returning them to the US.

Anaconda was later seen being defeated by the New Warriors. She was left tied up and gagged with webbing that was similar to Spider-Man’s web fluid.

While on a mission to kill Marcus Johnson, the Serpent society encountered Taskmaster and Deadpool. Deadpool cut off Anaconda’s arm with his sword. Anaconda and other members of Serpent Society were then arrested by S.H.I.E.L.D.

Most recently she has been seen working with the Serpent Society on numerous missions where one mission had her battling the Avengers, though she was again arrested. In next mission, she robbed a bank along with teammates Bushmaster, Asp, Cottonmouth and Puff Adder. However, they were defeated by the mutant Hope Summers. She was also a member of the Doom Maidens for a brief amount of time.

When Viper took over the leadership of the Serpent Society, the organization was renamed into Serpent Solutions. Aanaconda continued to work with them and eventually got into conflict with Captain America and Falcon.

The Serpent Solutions including Anaconda was recruited by Baron Helmet Zeno to join the Army of Evil in the Secret Empire storyline.