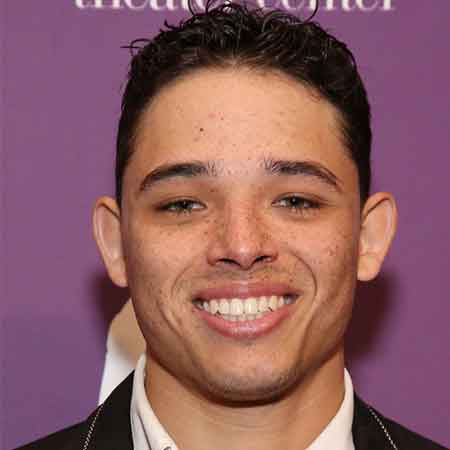 A Grammy Award winner Anthony Ramos is an American actor, widely acclaimed for his dual role as John Laurens and Philip Hamilton in the Broadway musical Hamilton. He currently plays the role of Mars Blackmon in television series, She’s Gotta Have It.

Ramos is in a relationship with his long-term girlfriend Jasmine Cephas Jones.

Anthony Ramos was born on 1st November 1991, in Brooklyn, New York City, New York, the United States as Anthony Ramos Martinez. He was raised by his mother along with his older brother and younger sister. Ramos belongs to an American nationality and holds white ethnicity.

On the year of his graduation, in 2011, Anthony Ramos got a chance to perform the role of Sonny LaTierri in a musical Grease at Surflight Theatre. Likewise, he next performed in musicals including Damn Yankees, In the Heights and 21 Chump Street.

Ramos gained a wide popularity after portraying dual roles of John Laurens and Philip Hamilton in the Broadway musical Hamilton. Similarly, Ramos made his television debut through Younger in 2015.

Moreover, he further appeared in Law & Order: Special Victims Unit along with, Tim McInnerny, Happy Anderson and so on. Since 2017, Ramos plays the role of Mars Blackmon in She’s Gotta Have It.

In 2016, Ramos made his movie debut appearing as Kilo in White Girl and as Younger Doorman in 10 Crosby. He starred as Manny Ortega in 2018 movie Monsters and Men. Furthermore, his 2018 movies A Star Is Born and Summertime are set for post-production.

Ramos will be starring in the movie Godzilla: King of the Monsters in 2019 and will be giving voice in 2020 movie Trolls World Tour.

Anthony Ramos stands the height of 5 feet 9inches 1.75 m and weighs 75 kg. As far, the 26 years old actor, Ramos is not married. However, he is in a relationship with his long-term girlfriend Jasmine Cephas Jones who is an American stage and screen actress.

Anthony Ramos and his girlfriend, Jasmine Cephas Jones met each other during the Off-Broadway production of Hamilton at The Public Theatre in 2015. Well, the couple began dating on February 16, 2015, and are still together. They are often seen spending their times together and further shares photos on Instagram.

As they have been in a relationship for long, they haven’t mentioned any plans of getting engaged or married. Besides, Ramos hasn’t dated any other girls apart from their relationship.

5 feet 9 inch tall Anthony Ramos has maintained a standard life. Ramos has appeared in many movies and television series and has performed in several musicals. From his acting career, Ramos earns a decent amount of money.

Ramos owns a dog of Dachshund breed worth $200 to $1,000.  Allocating information from several sources as of 2018 it is found out that his current net worth is estimated to be around $2 million. Looking at Ramos’ hard work and dedication, his net worth is sure to be increased in upcoming days.