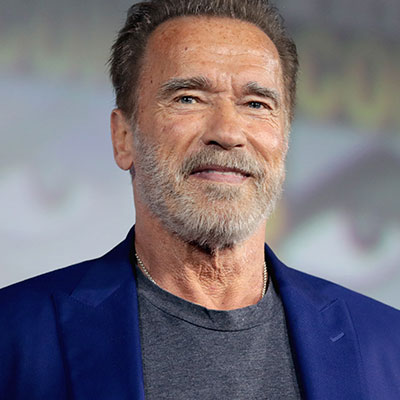 The multi-talented personality, Arnold married to his long-term girlfriend, Maria Shriver in 1986 and divorce after 25 years of marital relationship. To know more about his personal life, early life, career, education, net worth girlfriend, wife, married life, and much more. Keep Scrolling.

Arnold was born on 30th July 1947 in Thal, Styria, Austria to father Gustav Schwarzenegger, local chief of police, and mother, Aurelia Jadrny. He grew up along with his sibling, Meinhard who died in a car accident, in a Roman Catholic family.

In an interview with Fortune, he told he suffered from child abuse of his father but his parents had a good relationship. Though his parent got the divorce, his father was in touch with his mother until her death.

During school, he was an average student but was a cheerful, good-humored, and exuberant character. He was a sports lover since his childhood and eventually got interested in bodybuilding. He joined a gym at the age of 15 and at the age of 17, he officially started his competitive career. Arnold pursued his bachelor’s degree in Psychology.

Arnold was interested in Bodybuilding from his teenage and eventually decided to pursue a career in bodybuilding. While serving in the Austrian Army for a year at the age of 18, he won the Junior Mr. Europe contest which encourages him for AWOL training and participated in a several competition.

Starting the weight training at the age of 15, Arnold Alois Schwarzenegger won the Mr. Universe title at the age of 20. He also won the Mr. Olympia contest seven times and is considered one of the best professional bodybuilders of all times. Since 1965 to 1980, he took part in 22 different competition around the globe where he stood 1st in almost every competition.

After achieving huge success in bodybuilding, Arnold moved towards acting, debuting in the 1970’s movie Hercules in New York. After featuring in several movies, his breakthrough movie was Conan the Barbarian in 1982 and become an international star after performing in the successful action movies such as Commando, Raw Deal, The Running Man, Predator, Red Heat, etc.

Moreover, Arnold most successful and blockbuster movies include The Terminator franchise, Total Recall, Batman and Robin, The Expendables, The Last Stand, Escape Plan, and several others. He earned worldwide fame as the Hollywood action-film icon and one of the biggest superstar.

Arnold Alois was first elected on 7th October 2003 to replace then-Governor Gray Davis as a Republican and took sworn on 17th November 2003. After great service and work as a Governor, he re-elected in 2006 California gubernatorial election in order to serve as a full term.

Besides, Arnold outstanding acting career, he also had a highly successful business career. At the age of 30, he became a millionaire which came from his success as a budding entrepreneur. During 1992, he along with his wife opened a restaurant in Santa Monica named as Schatzi On Main. He also owns several other successful business ventures.

Arnold has earned wide recognition and fame by his outstanding acting skills, Bodybuilding, and as a former Governor of California. He has won Mr. Olympia seven times, Mr. Universe for four times, World Amateur Bodybuilding Champion, Star on the Hollywood Walk of Fame, WWE Hall of Fame, International Sports Hall of Fame, Schwarzenegger Institute for State and Global Policy, Commander of the French Ordre National de La Legion d’Honneur and several others.

After 25 years of marital relationship, Maria and Arnold ended their relationship in divorce on 9th May 2011. Beside his marital relationship with Maria, Arnold had fathered a son with an employee in their household, Mildred Patricia “Patty” Baena. Being a responsible father, Arnold purchased a new home nearby for her and shared custody.

Before engaging in any marital relationship, Arnold Schwarzenegger dated an English teacher, Barbara Outland, in 1974, Hairdresser’s assistant Sur Moray in 1977, and Kay Show in 1973. Additionally, he had also encountered with Rachel Ticotin in 1989, Gigi Goyette in 1989 to 1996, Debra Wrenn in 1982, Eleanor Mondale in 1979 and Kellie Everts in 1972.

Arnold Alois Schwarzenegger earns a good sum of money in his career. Being Actor, Model, Bodybuilder, Governor, and Businessman, he has several sources of income through which he obtains a tremendous amount of money.

Schwarzenegger also owes $38 million of his money in a private Gulfstream Jet. Allocating information from several sources it is found out that his current net worth as per 2018 is more than $800 million.