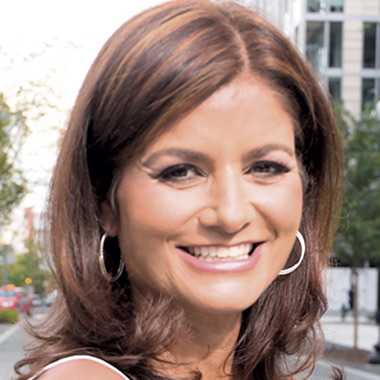 Asieh Namdar was born in 1967 in Karachi, Pakistan. She is a famous Iranian American television presenter and journalist. Her both parents were of Iranian origin. Her father used to work at World Bank and later moved to Karachi with her mother and sister. She spent her childhood in Tehran, Iran with her loving family.

Her father and her mother placed a lot of emphasis on her education. She later moved to United States when she was 12 years old following the Iranian Revolution in 1979. At first she was not fluent in speaking English. Namdar attended University of California at Berkeley and graduated from there holding bachelor’s degree in communications.

After graduating from University of California at Berkeley she started her career working as a video journalist at CNN. During her work at CNN, she used to work overnight hours and also whole day. She was a senior writer for HLN. She then worked for CNN International as an anchor for 23 years. She there provides reports of international news. Previously she worked on HLN daily segment called The Global Minute as an anchor, producer and writer. While anchoring the program she provided features and updates on news from all around the world. Later she worked for CNN World Report on CNN International as their host.

In 1989 she joined CNN which is based in network’s world headquarters in Atlanta. While working at CNN she reported on several stories and events such as Middle East conflict, the wars in Afghanistan, the civil war in Northern Uganda and Iraq and also the attacks in Mumbai etc. She then also reported on the tsunami disaster in Asia. She reported about the earthquake in the ancient Iranian city of Bam as she travelled to Bam in 2004. She travelled there with a team of American doctors and provided relief to survivors. She interviewed many orphans and also families who had lost their closed ones in the earthquake.

Namdar has also covered Indian Ocean tsunami disaster which had affected many countries like Indonesia, Sri Lanka, India and Thailand. She there reported about the children who have lost their parents. During her work at CNN she interviewed many personalities, world leader as well as newsmakers. Some of them are former U.S. President Jimmy Carter, best-selling author Azar Nafisi, Nobel Peace-Prize Laureate Shirin Ebadi, Pakistani Minister Benazir Bhutto and also Jordan’s Queen Rania. She is well-known for her several deeds from Iranian-American organizations.

She can fluently speak and write in Persian. Namdar is a happily married woman. She got married to a handsome husband. She has two beautiful daughters named Leila and Roya who are 17 years and 12 years old respectively. She says her daughters are very intelligent using the new technology. She has a very supportive husband and loving children. Asieh is also very friendly to her fans. She keeps in touch with her fans through her social networking sites.