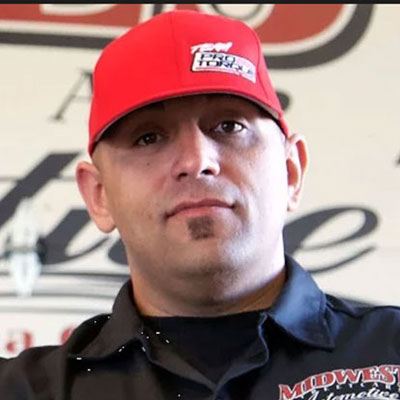 Justin Shearer who is widely known for his nickname Big Chief is a television personality. Chief is better known for starring in the Discovery channel reality program Street Outlaws.

The reality star Chief is married to his long-term girlfriend Alicia Shearer. The couple has two sons Corbin Shearer and Covil Shearer.

Big Chief was born on 9th December 1980, in  Louisville, Kentucky, United States. He holds American nationality and belongs to white ethnicity. However, Chief hasn’t revealed any information about his parents and siblings.

Since his childhood, Chief was interested in street racing and began racing bike at the age of 9. At the age of 12, in 1992, Chief moved to Oklahoma City along with his family. Likewise, his education background is also still unknown.

As Big Chief developed his interest in racing since his early age, he began racing bike at the age of nine. And as he grew up, Chief established himself in Oklahoma City street racing community. Chief participated in several car racing competitions held at Oklahoma City.

Well, Chief’s first racing car was 1972 Pontiac LeMans. Chief gained a wide recognition after hosting the Discovery Channel’s reality show, Street Outlaws. The show is based on the street racers and gives them to show their talents and their passion for racing and further cares about the lives of racers.

Besides this, Chief currently works at Midwest Street Cars Automotive which is a part of the show. Apart from this, he further trains at the gym.

The renowned and versatile personality, Big Chief is already married to his long-term girlfriend Alicia Shearer. Chief met his future wife at the age of 18 at the full-service gas station where he used to work.

After dating for several years, the couple decided to take their relationship to the next level and finally tied the knot on 29th September 2006.

The couple has two sons Covil Shearer and Corbin Shearer.  However, once there was a rumor that the couple is getting a divorce. Similarly, Chief was also rumored to have an affair with Jacklyn Braasch but Chief proved it just a rumor.

In an interview, Chief mentioned that his sons were his biggest fans and proudest supporters.  Well, the couple is now living happily with their children without facing any rumors of divorce and extramarital affairs.

Big Chief is living a lavish life along with his family. From his multiple careers, Chief earns an astonishing amount of money. Allocating information form several sources as of 2018, it is found out that Big Chief current estimated net worth is around $2 million.

Furthermore, he also owns several luxurious cars and bikes. Chief still owns his first racing car 1972 Pontiac LeMans which he has named The Crow and also a Chevrolet worth around $2500. Similarly, he further has a Pitbull dog which worth $500 – $ 700.