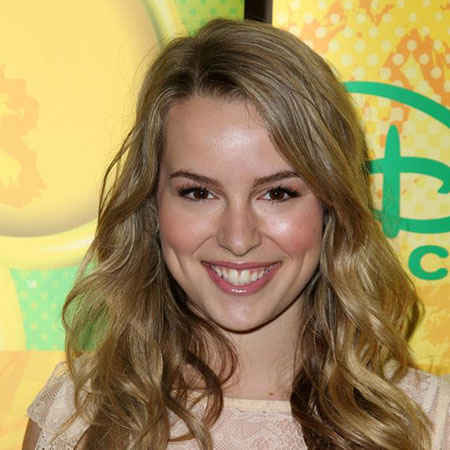 Bridgit Mendler is an American singer, record producer, songwriter, and actress. She began her career in the animated film The Legend of Buddha. She is mainly known for her television series Good Luck Charlie by Disney Channel Original. She played the character of Teddy Ducan in it.

Bridgit was born on December 18, 1992, in Washington D.C. Her father’s name is Harry Mendler and her mother’s name is Leah Mendler. When she was eight years old, she moved to Mill Valley, California with her family. She started taking part in local roles and became the youngest to perform at the San Francisco Fringe Festival.

She studied at the Lafayette Elementary School. She is currently attending Stanford University Online High School education program for her graduation.

In 2004 she got her first acting role in the animated film The Legend of Buddha. She then guests star on the soap opera General Hospital. She got her film debut in Alice Upside Down in 2007. She played the role of Kristen on the popular teen novel series The Clique. She worked with singer and actress Lindsay Lohan in film Labor Pains. Due to some problems the film was released as a TV film on ABC Family in 2009. She appeared in the film Alvin and the Chipmunks: The Squeakquel as a supporting role. She had a recurring character in the series Wizards of Waverly Palace in 2009.

She became the star of the Series Good Luck Charlie in 2010. She got the lead role in the movie Lemonade Mouth in 2011. She played the role of Olivia White. On April 12, 2011, the film’s soundtrack performed by Mendler was released by Walt Disney Records. On March 4, the film’s first single “Somebody” was released. The second single was “Determinate”. She had a supporting role in the film Beverly Hills Chihuahua 2 in 2011. On January 11, 2011, the song “This Is My Paradise” of the film recorded by Mendler was released. The news about her signing contract with Hollywood Records was confirmed on March 31, 2011. She starred in the movie Good Luck Charlie, It’s Christmas! In 2011. She recorded the song “I’m Gonna Run to You” for the film and on November 12, 2011, it was released as promotional single. She released her third promotional single “We Can Change the World” on June 11, 2011.

She then guests starred as Callie Rogers in the television series House in 2012. Her official debut single was “Ready or Not”. On August 7, the song was released for digital download. The song successfully reached platinum certification in the US and Canada and gold certification in Norway, Denmark, and New Zealand. On October 22, she released her debut album “Hello My Name Is…”. The album includes 12 tracks in the standard version and 15 tracks in the deluxe edition. The two promotional singles of the album are “Top of the World” and “Forgot to Laugh”. She released her second single “Hurricane” on February 12, 2013. She starred as Candace in the comedy series Undateable.

She is in a relationship with Shane harper since 2010. Shane is an American actor, songwriter, singer as well as dancer. He was her co-star in Good Luck Charlie.

She has dyed her hair in blonde. Her eyes are light brown in color. She belongs to the white ethnic background. She follows the Christian religion and as of 2016, Mendler’s net worth is estimated to be $550 thousand.