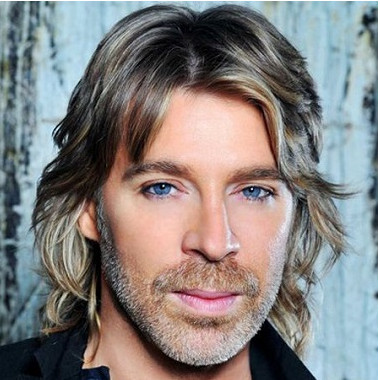 Chaz Dean is a Hollywood hairstylist, who changed the way people style their hair by creating and marketing the “Wen Products”. Having an A-list clientele, Dean has gained prominence for his all-natural line of WEN hair, body and bath products, which are free of sulfates and detergents.

There are lots of rumors about Chaz Dean Sexuality, Affairs, and Relationship. Many sources claim that he is also gay but Chaz hasn’t shared much information which leaves his fans in a dilemma. Once he shares a picture of his high school girlfriend via Instagram.

Chaz Dean was born in Vermont and was raised by adoptive parents. He grew up in New Jersey and the Pennsylvania countryside until he was thirteen when his family relocated to Southern California. Chaz graduated high school from a  small town of Simi Valley, California; after which, his family moved again to Phoenix, Arizona.

When he was in high school, he found his love and talent for photography, a gift that impelled his eventual raid into hair care and design. He took photography courses and developed a passion for it during a cross-country tour with his family. After chronicling the whole trip back and forth across the United States, Dean determined to pursue photography as a career.

After attending commercial photography courses in Phoenix, Dean shifted to Los Angeles to make his way as a photographer. He says “L.A. was so big, though, that I decided to go to cosmetology school to enhance my career and photography”.

His first assistant job, at a salon in LA, placed him on course for the life he lives today. With limited money to support himself, he set his heart and soul into his work. “ It was tough, starting out, he says. “ But it set me up to appreciate hard work.”

Throughout those early years, Dean emerged a passion for creating the “total picture.” Thus, he is a skilful cutter, colorist and makeup artist. After finishing from cosmetology school, his goal was to work at Vidal Sassoon. “After interviewing with them, they allowed me a job, but they wanted me to do only cuts or colour, not both,” he says.

“There was no way I could do that.” So, Dean went to work for a salon that allowed him to both cut and colour instead and worked his way up through the ranks during the 1980s. He grew soon to became a stylist and then to purchase the salon where he began his career. He started to draw a celebrity clientele.

By the mid-1990s, however, Dean began wanting a new location. “People used to start by the centre when my salon was in Bel Air and videotape my clients, then the next week they would show up in the tabloids,” he reveals. “I decided I wanted to offer an environment that was more intimate and secluded, a safe-haven for my clients.”

Once he found his new location, he split his time between the two places for a while but decided to close the doors to his Bel Air facility in 1999 to focus solely on the work of the Chaz Dean Studio and Lifestyle bungalow in Hollywood.

Although his client asked him to move from an upscale Westside location to his current location in the heart of Hollywood, most have followed him through the change, and his celebrity following is applied. Among those are Lisa Edelstein, Charlize Theron, Ming-Na, Ben Foster, Nicollette Sheridan, and countless others.

He developed the WEN Cleansing Conditioner concept, and it worked. It is a five in one formula, which takes the place of your shampoo, deep conditioner, conditioner, detangler and leave-in conditioner. Which cleanses hair thoroughly without harsh sulphates found in some ordinary shampoos. It won’t displace your hair of natural oils.

Your hair is split with strength, moisture, and manageability. His first celebrity client, Nicolette Sheridan and he worked with several actors from the Aaron Spelling shows of the time. He was able to dramatically improve the condition of their hair, to restore the body, shine and bounce, Everybody took notice wanted that.

His work with celebrities kept him and his salon in the spotlight. By the time he styled Alanis Morissette’s hair in 1999 the year she won a Grammy Awards for her hit single Uninvited, his career was about to reach a new level. He says “ I’ll never forget it”.

With the success of WEN, he became a head on TV Shows such as The Doctors, Life Changers and Ricki Lake speaking about healthy hair and hair transformations. He is also well known for his award-winning WEN Hair Care infomercial as well as his long-running partnership with Jeff Lewis on Bravo’s Flipping Out.

His recent appearance on Celebrity apprentice with Lisa Rinna. Though he continuously develops new products to enhance the WEN Hair & Body Care Line, every new offering stays true to his original philosophy of using natural ingredients and no harmful detergents and sulphates. The nourishing botanical ingredients found in WEN products are restrictive for even the driest damage and fizzy hair.

On 1st November 2016,  $26 million lawsuits was filed against Chaz Dean’s WEN Care Products. As a result of this class-action suit, 6 million people could be qualified to for a commercial award, from $25 up to $20,000, though a U.S. District Court judge still needs to provide final approval to the settlement.

The FDA is examining claims of hair loss from its cleansing conditioners as well, with over 127 consumer objections filed. That also happens to be the greatest number of news ever allied with any cosmetic hair cleansing product, according to the FDA. However, Wen by Chaz Dean and its seller, Guthy-Renker, still insist that their products are safe for use.

Though his primary focus is hair, Dean remained with his photography, employing the space above his salon as a studio. “Photography was my vision that started it all,” he says. In addition to providing his photography for charity events, Dean also shoots “personality” and celebrity photography. “I love to capture the essence of an individual on film,” he says.

Contributions to People and Animals in Need

As his business grew, so did his contributions to people and animals in need. During difficult economic times, he works even harder to support vulnerable people because he knows it to give.

The list of charities supported by Chaz and his team is from Keep a Child Alive, to Habitat for Humanity, to the Noh8 Campaign, Love is Louder, Best Friend Animal Society and Orphan Winfrey Leadership Academy for Girls.

He donates money, time and support to spread awareness and bring comfort to those less Fortune. He says “ I think awareness is key. Until people hear the statistics and hear about others circumstances, they just don’t know. Whatever we can to do get attention for these important issues, we’ll do”.

In spare time, Dean enjoys yoga, pilates, cycling, hiking with his dogs, spiritual meditation and cooking. He says, “I should have known I’d wind up doing hair,”. He added “I used to cut all my sister’s doll’s hair, then I cut her hair. I wanted to be in a career where I had creative input. I needed a creative outlet, and by doing photography and hair, I can be completely myself”.

There are lots of rumors about Chaz Dean Sexuality, Affairs, and Relationship. Many sources claim that he is also gay but Chaz hasn’t shared much information which leaves his fans in a dilemma. Once he shares a picture of his high school girlfriend via Instagram.

Moreover, Chaz had also shared some cozy pictures with his friends. Which makes his fans more confusing. Here are some of the pictures he shared through Instagram.

Chaz Dean earns his handsome salary from his hair stylist career. He is involved in a hairstylist business since long ago and turned a good amount of revenue. Moreover, he has also launched different hair produces through which he obtains a good amount of money.

Allocating information from several sources as of 2018 it is found out that Chaz Dean current net worth is estimated to be around $11 million. Dean holds an American nationality and belongs to white ethnicity. He owns a beautiful house in West Chester, PA.