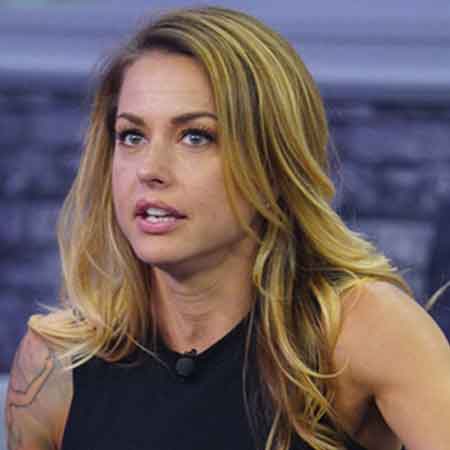 Christmas Abbott is an American fitness trainer, a CrossFit Games athlete and the first female in NASCAR Sprint Cup pit crew member. However, Abbott has gained wide popularity for her appearance in a television reality game show Big Brother.

As of 2019, Christmas Abbott has an estimated net worth of $800,000. Further, her annual salary as a fitness trainer is $250,000. She is engaged to boyfriend, Benjamin Bunn and is blessed with their first child Loyal Atticus Abbott, born in 2018. Moreover, she was previously engaged to photographer Josh Holmes.

What is Christmas Abbott’s Net Worth in 2019?

You may like: Television personality and fitness trainer Cara Maria Sorbello ‘s Bio!

From her career, Abbott earns an astonishing amount of money. Currently, Abbott enjoys an annual salary of ‎$250,000.

Abbott owns a Bulldog worth $2,500–$9,000. Also, she owns a Mercedes Benz SUV. Abbott is seen spending her time with friends and boyfriend during vacations.

As of 2019, Christmas Abbott has a huge number of followers on social media. She has been followed by more than 74.8k people on Twitter, 741k people on Facebook, and 723k people on Instagram, respectively. Similarly, her YouTube channel has more than 14k subscribers.

The 37 years old fitness trainer, Abbott is neither married nor single. Currently, she is engaged to her boyfriend, Benjamin Bunn, also a fitness trainer. On October 10, 2015, the couple got engaged.

Moreover, they had planned to get married on September 3, 2017, in Raleigh, North Carolina but their wedding wasn’t conducted. What’s more, Abbott and Bunn welcomed their first baby, Loyal Atticus Abbott on October 8, 2018, weighing 8 lbs 15 oz and 22.5” long at 11:28 pm in WakeMed Health & Hospitals.

Besides this, Abbott was previously engaged to a photographer, Josh Holmes. But the couple failed to continue their relationship and finally separated in 2014.

After her graduation, Christmas Abbott tried to join Army but she got rejected. Later, Abbott joined the US base at Iraq as an independent civilian laundry attendant. While at, camp, Abbott realized the value of life and decided to change her career path. Abbott began her training after she was introduced by one of her fellow soldiers.

After working for four years in Iraq, Abbott returned to the US and started her own CrossFit coaching class in Raleigh. Later, Abbott opened her own gym named CrossFit Evoke in 2010. Abbott even competed at Weightlifting competitions which helped her gain national rankings.

Moreover, in 2013, Abbott became the first female Pit Crew member in the famed NASCAR. She has appeared in the covers of several fitness magazines including Sports Illustrated and Harper Collins.

Furthermore, in May 2015, Abbott released a book entitled The Badass Body Diet: The Breakthrough Diet and Workout for a Tight Booty, Sexy Abs, and Lean Legs.

Christmas Joye Abbott was born on 20th December 1981, in Lynchburg, Virginia, United States. She holds an American nationality and belongs to white ethnicity. Her mother Barbara Abbott is an American Army Vet whereas her father Ed Abbott is an avid biker.

Abbott’s developed her love for tattoos from her father. She grew up along with her sister, Kole Abbott.

Abbott and her sister Kole faced a horrific accident when she was 13 years old. Due to the accident, Abbott went through a disastrous life of incessant drinking, smoking and further doing heavy drugs.

In the accident, Kole was severely injured and went into a coma but was later recovered. At the age of 18, Abbott completed her high school.