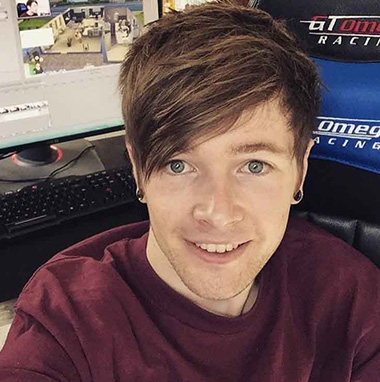 Youtuber Daniel Middletown is best-known as TheDiamondMinecraft or DanTDM. Till date, he has uploaded more than 1300+ videos. He is famous for Let’s Play series which includes The diamond Dimensions and the latest series of Minecraft Xbox One.

Daniel Middletown was born on November 8, 1991, in England. He is the eldest of two siblings. His parents divorced when he was a child. He attended Northampton University and created a YouTube channel dedicated to Pokémon while he was a student, in which he called himself “PokemanDanLv45”.

In the series Minecraft Xbox One, he attempts to build a giant kingdom in survival. He constantly made vlogs and opened a YouTube channel for his vlogs called as MoreTDM. He is often found doing Trayaurus videos. In his videos, Trayaurus is shown doing his pesky tasks. He also has started a mini challenge series called as ‘Dr. Trayaurus’ Challenge Colosseum”. In the challenge, he competes with Dr.Trayaurus against each other.

Daniel’s main mods are The Lion King Mod, Grimoire of Gaia 2, The Eternal Frost Dimension, the twilight forest Dimension, the Galacticraft Mod and The Atum Desert Dimension. His one of the faithful companion is Far. Far is a pig farmer from the MyPeople Mod who is born by a Human Egg. The series have over 210 videos. The Diamond Dimensions second season has 62 mods and is now for 1.6.4 although it is not released for public yet. He has to ask permission from over 25 modders. He also has a spider pet and a battle pig named as Baconator. Unfortunately, his pet spider was killed by his son Craig. To have a second child he did multiple attempts and next one got killed. He has created a daughter called as Trinity. His son Craig wife Stephanie died together with his 3rd child Alexis by the Uvaraptors.

The Diamond Dimensions third season has 45 mods and is now for 1.7.9 and is not released for public. He found a Portal To the Heaven Dimension on episode 145. To safely land on the ground he needed to find gunpowder by killing Creepers in mineshafts. He found his entire family as well as the fellow villagers while he was searching for gun powder. He made a Jetpack to travel around for preventing himself from falling. He found a lucky block when he visited the nether. When he was there it gave a mushroom called as DanTDM’s last Hope

Daniel Middletown is a happily married man. He got married to his beautiful wife Jemma Middletown. Jemma is also famous as xXJemmaMXx. The couple together has done videos together. Some of the videos are Husband vs. Wife mini-games and Wife Survival. The couple loves dogs. They have two pugs named Ellie and Darcie.

Dani’s mod showcases are mostly recommended because of his involvement with the mod and also make a storyline for helping people to understand the mod making it funnier. Dr. Trayauraus is the most popular mod. Trayaurus is a scientist. According to Dan, Dr. Trayaurus is not very intelligent as he didn’t go to school. He currently has stopped mod showcases. Most of the time his mod showcases take place in Dr. Trayaurus’ Lab. As of 2017, Daniel Middletown has an estimated net worth of $10 million dollars.