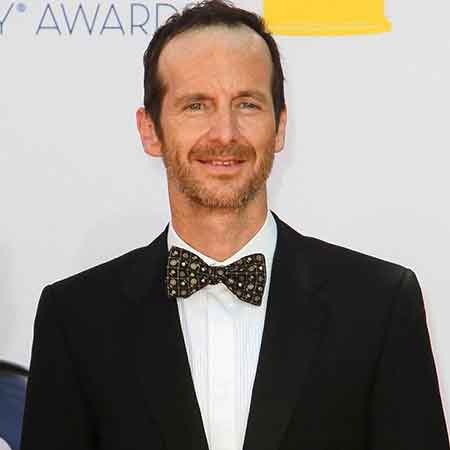 Denis O’Hare is an American actor who is noted for his role as Larry Harvey on the FX series, American Horror Story. Besides, he also played vampire king, Russell Edgington on HBO’s fantasy series, True Blood. He has won multiple awards including, Critics Choice, Online Film & Television Association, Phoenix Film Critics Society, Clarence Derwent Awards and so on.

O’Hare is a married man. He married to gay husband, Hugo Redwood who is a designer. The gay couple has adopted a son, Declan. Well, in today’s session, we will be revealing detail about this talented actor, affair, gay, sexuality, husband, married life, children, relationship, career, early life, salary, net worth, personal life, and much more. Keep Scrolling!!!

Denis Patrick Seamus O’Hare was born on January 17, 1962, in Kansas City, Missouri, to John M. O’Hare, father, and Margaret Karene, mother. He has four siblings, three sisters Pam, Kathleen and Patricia and a brother, Michael.  Regarding his nationality, Denis O’Hare is American and is of Irish descent.

O’Hare attended at the Northwestern University where he studied acting and theatre before beginning a professional acting career. As a teenager, he gained a chorus part in a community theatre production of Show Boat.

Denis O’Hare starred as Larry Harvey in the FX series, American Horror Story’s first season in 2011. For the role, he was nominated for a Primetime Emmy Award for Outstanding Supporting Actor. Besides, he also appeared as a guest star on several episodes of television series Law & Order as well as its spin-offs.

His other feature film credits include The Anniversary Party, Garden State, 21 Grams, Michael Clayton, Edge of Darkness, A Mighty Heart, Derailed, Half Nelson and so on. Moreover, he also made an appearance on the television series The Good wife as Judge Charles Abernathy.

More recently, he has appeared in the film, Private life, Lizzie and is working on the television series, The Good Fight. Currently, he is working on his upcoming movies, The Goldfinch, Late Night, and Swallow.

Denis O’Hare is openly gay and is a married man. He married to designer, Hugo Redwood on July 28, 2011. The gay couple met each other online. They have adopted a son, Declan.

[ CAPTION: Denis O’Hare and Hugo with their children ][ SOURCE: SCO Family of Services ]

Youtube: Denis O’Hare and his partner Hugo with their children;

They have been living together for almost seven years and still, they share a happy life. Apart from their relationship, they both kept themselves away from the external affairs and neither till the date, there has been any rumors or news of their extra relationship in the media. The partner supports each other in their daily activities as well as to their professional career.

Denis O’Hare Collects a nice measure of cash from his acting professions. Till the present context, he has made more than 100 onscreen appearances. Besides, he has also won numbers of awards. As of 2018, his net worth is estimated at around $2 million. Seeing his works, his net worth is sure to increase in coming days.