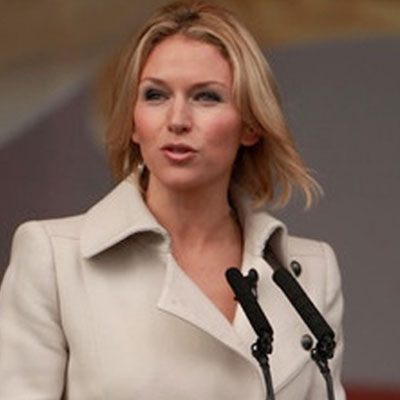 Diana “Di” Dougherty, popularly known as Di Stewart, is a famous golf commentator. She is known to present on Sky Sports of the Golf Night.

Diana’s interest in golf came to her through her parents. She is married to the husband who is European Tour golfer, Nicholas James Dougherty. The couple has a son named Max. To know all about Diana and her personal and professional life, stick with us.

Born on 18th January 1979, Di Stewart was born in Salford, Greater Manchester, UK. She did her high school schooling at Stockport Grammar School, Stockport, which is the second oldest school in the North of England.

Di was very consumed with sports, especially golf since her early age. She says that she used to spend the free time of her childhood watching and playing games and matches while other girls her age were busy playing with barbies and houses.

She was known to play for the local club since her early age. Stewart, after her high school, joined the University of Newcastle upon Tyne. The major for her undergraduate studies was German.

During her studies, Di didn’t limit herself to the academic sector. Being invested in sports since her early days, she was known to play Golf and Netball.

The professional career of the dynamic and beautiful commentator, Di Stewart’s, began when she was taken is as a ground crew member in the Galaxy Radio.

En route to hone her professional abilities and to work for a higher and bigger co-operation, Di, later on, joined in the Sky Sports as a runner. The major portion of her job was to bring coffee at the time. But that was soon about to change.

Seeing Di’s undying interest in golf and her natural charisma and charm, Sky Sports News Channel, gave her the position as one of the presentations in the channel. In 2007, Sky news decided to launch a specific golf programme and unsurprisingly Di Stewart was chosen to be the host presentation for the show. Currently, she is still working for the channel.

Di has also made several cameos on various other programmes. She was seen on Sky3’s More Big Ideas, on the show she spoke about the winners and losers of the match and gave a critical analysis of the match in general.

In 2009, Di appeared with ESPN’s Scott Van Pelt on a series of adverts for golf balls of Titleist.
Di can be seen co-hosting Game Changers of Sky 1 on Saturday mornings. Stewart has been given the prestigious position of an ambassador for Lynx Golf.

Di states that her interest in golf buds from her parents, though forcefully at first but later on she developed an affinity for the sport. Di’s maternal side along with her mother, as Di says, are big into golfing and her father was running for the position of the President for the local golf club.

Di recalls that she picked up her first golf’s club at the age of 6 and the club is till this date the finest she has had.

In 2001, Di and the rugby player, Johnny Wilkinson dated each other but sadly broke up at the end of 2001. Later in 2006, Stewart dated the British TV personality, Declan Donnelly, which also met its end.

After that, she was reportedly involved with the handsome Australian actor, Blair McDonough.
Currently, Di is married to the European Tour golfer, Nicholas James Dougherty. The couple got married on 2010 New Year’s Eve. Di and Nicholas have a baby boy, Max James Dougherty.

Diana is a committed and very hard-working golf player. She has been able to add millions to her net worth. Though her exact net worth is still unknown, it’s sure she earns million dollars. Also, being a popular presenter and married to a prominent sports star, we can assume that she lives very luxuriously.