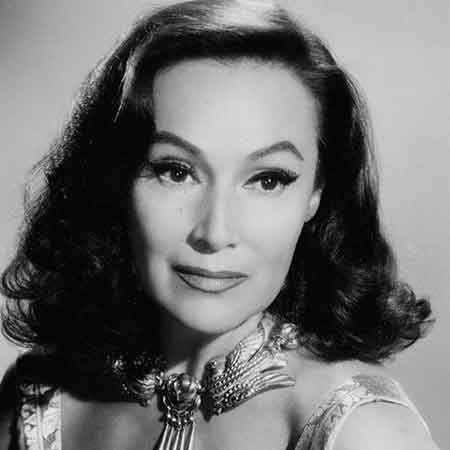 Dolores del Rio was a Mexican actress who was the first major female Latin American crossover star in Hollywood. Rio was married thrice but two of her marriages ended with a divorce.

Rio was previously married to Jaime Del Rio and Cedric Gibbons. Similarly, Rio was married to her spouse Lewis Riley until her death in 1983. Rio died at the age of 78 due to liver failure.

Dolores del Rio was born on 3rd August 1903, in Durango, Mexico. Her parents were father Jesus Leonardo Asúnsolo Jacques and mother Antonia Lopez-Negrete. Her family lost all assets during the Mexican Revolution.

Dolores del Rio was discovered by the filmmaker Edwin Carewe in Mexico. Rio made her acting debut through the movie Joanna in 1925. Rio next starred in the movie What Price Glory? Since then, she appeared in popular movies such as Resurrection and Ramona.

During the 1940s and 1950s, Rio was considered as one of the more important female figures of the Golden Age of Mexican cinema. Her other notable movie roles include in Wild Flower, Las Abandonadas etc.

Dolores del Rio was married thrice but two of her previous marriages ended with a divorce. Rio was first married to Jaime Del Rio. The couple met each other at a party to benefit a local hospital in the Teatro Esperanza Iris.

Rio and Jaime exchanged their vows on 11th April 1921. At the time of their wedding, her husband Jaime was 35 years old but Rio was not even 17 years old. However, the couple failed to continue their relationship and divorced on 7th June 1928.

In 1930, Rio met an artistic director Cedric Gibbons at a party at Hearst Castle. The pair began dating and after few months on 6th August 1930, Rio and Cedric tied the knot. In the early thirties, the husband and wife were the most famous couples of Hollywood.

However, the things didn’t go well in between the couple and they divorced on 17th January 1941. After her divorce, Rio married her third husband Lewis Riley in 1959. Rio and her husband Lewis were together until her death in 1983. As Rio was married thrice she did not have any children from her relationships.

Other than this, Rio further dated several other celebrities including actor Errol Flynn and filmmaker John Farrow. Moreover, Rio further had affairs with Erich Maria Remarque and Tito Junco. Including all, Rio had 20 relationships.

Dorles del Rio was diagnosed with osteomyelitis in 1978, and with Hepatitis B in 1981. Moreover, she also suffered from arthritis. Rio was admitted to Scripps Hospital, La Jolla, California in 1982, where hepatitis led to cirrhosis. Unfortunately, Rio died at the age of 78 in Newport Beach, California due to liver failure.

As of now, the estimated net worth of Dolores del Rio is still under review. Rio might have earned a good sum of money from her acting career. She has starred in numerous popular movies and television series. Rio might also have got paid a good salary for her appearances in movies and tv series.