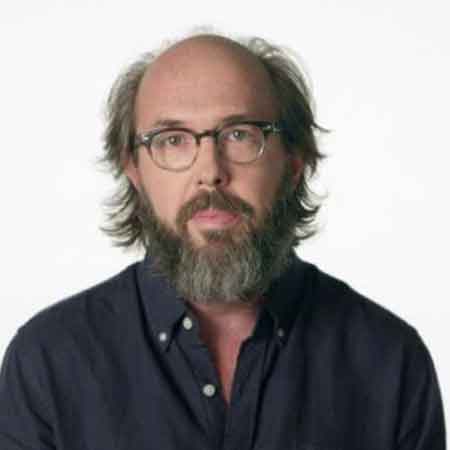 An American television as well as a movie actor, Eric Lange is widely known for his role as Erwin Sikowitz in the television show Victorious. Lange is married to Lisa Sabatino and has two children from their relationship.

Born on 19th February 1973, in Hamilton, Ohio, United States, Eric Lange belongs to an American nationality and holds white ethnicity. However, the details about Lange’s parents and siblings are yet to be revealed.

Eric Lange began his acting career in 1996, appearing in the movie High School High as a singing waiter. In the same way, he made his television debut through The Bold and the Beautiful in 1998. Lange came to fame after playing the role of Lyle in the series Cold Case.

Lange has further starred in numbers of popular series including,

Recently in 2018, Lange played the role of Ron Engelman in miniseries Waco and as Lyle Mitchell in Escape at Dannemora. Furthermore, along with Paulina Gaitán, Alberto Ammann, Pedro Pascal, Wagner Moura etc, he starred in the series Narcos.

Aged 45, the renowned actor Eric Lange is married to Lisa Sabatino. However, none of them have mentioned their exact date of engagement and wedding. Whatever it is, the couple is blessed with two children.

Lange and his wife Lisa have a daughter named Maisie Lange and a son Oliver James Lange. Despite being busy in his career, Lange has successfully maintained his family as well as career. He is one of the caring husbands and fathers.

Lange often spends his time with family and further shares adorable photos on Instagram. The duo has maintained a peaceful relationship without facing any rumors of divorce and extramarital affairs. Besides this, Lange didn’t have any other girlfriends in past.

One of the well-known actor Eric Lange currently resides in Los Angeles with his wife and children. He earns a decent amount of money from his acting career and has a good net worth.

Lange gets a good salary from each movie and series. He also owns a car. Allocating information from several sources as of 2018 it is found out that his current net worth is around a million dollar.