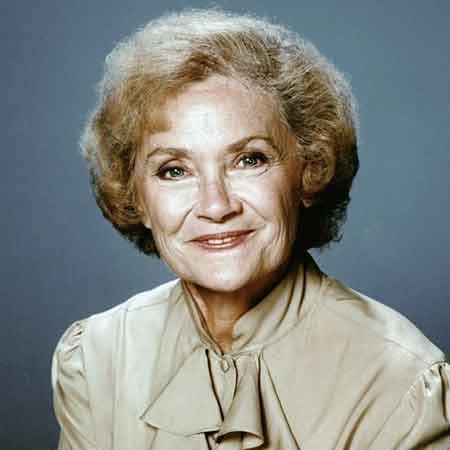 Estelle Getty was an American actress as well as a comedian. Getty was married to Arthur Gettleman and had two children from their relationship.

Getty was known for her role as Sophia Petrillo on The Golden Girls for which she won an Emmy and a Golden Globe Award. Getty died on 22nd July 2008 just three days before her 85th birthday due to Lewy body dementia.

In 1978, Estelle Getty made her acting debut through a movie Team-Mates playing the role of a teacher. After that, Getty starred in several movies such as Deadly Force, Mask, Stuart Little etc.

Similarly, Getty made her television series debut though Nurse in 1981. For her role as  Sophia Petrillo on The Golden Girls Getty won a Golden Globe Award as well as an Emmy Award.

Estelle Getty was married to Arthur Gettleman. Her husband was a businessperson. Getty tied the know with her husband on 21st December 1947. From their relationship, the couple was blessed with two children.

The duo didn’t face any rumors of their divorce and extramarital affairs. After the death of her husband, Getty didn’t marry next husband. Besides this, Getty didn’t have any other relationships and affairs.

The renowned actress Estelle Getty died on 22nd July 2008 in Hollywood, Los Angeles, California, United States just before three days of her 85th birthday. The cause of her death was due to Lewy body dementia.

Read: What is the Cause of death of American Actor, John Ritter? and his Personal life and Family

Getty’s funeral was done on after three days of her death on the day of her birthday on 25th July 2008. Her body was buried in Hollywood Forever Cemetery, Los Angeles, California, United States.

Estelle Getty Net worth and Earnings

Estelle Getty had an estimated net worth of $8 million. Her main source of earnings was thorough her acting career. Getty had starred in numbers of movies and television series. Getty owned a house in Los Angeles, California, United States.