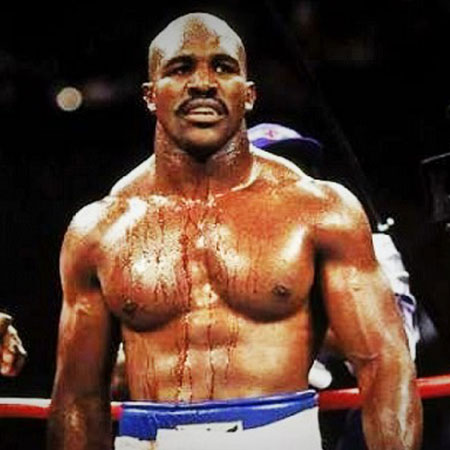 As a boxer, Evander Holyfield used to earn approximately $30 million for a single fight. He reportedly has a net worth around $100 million. Relating to his married life, Holyfield is married thrice. Details are available below.

Evander Holyfield was born on October 19, 1962, in Atmore, Alabama to father, Isom coley and mother, Annie Laura Holyfield. As per his nationality, he is an American citizen and belongs to African-American ethnic group. Further, his star sign is Libra. He grew up along with his brother, Bernand Holyfield.

Holyfield attended Fulton High School and graduated from there. He began boxing at a very early age of seven and won the Boys Club boxing tournament.

At the age of 13, he qualified to compete in his first Junior Olympics and by the age of 15, Holyfield became the Southeastern Regional Champion by winning the championship. He was honored as the Best Boxer holding a record of 160 wins and 14 losses, with 76 by knockout till 1984.

Holyfield has won several championships with a silver and a bronze medal. In 1984 Summer Olympics Games in Los Angeles, California, he was the representative for the USA. After a controversial disqualification in the second round of the semi-final, he won a bronze medal.

Holyfield started his professional boxing career in a light heavyweight division with a televised win in six-rounds over Lionel Byarm at Madison Square Garden on November 15, 1984. Similarly, he also won the next two matches against Eric Winbush and Mark Rivera.

He later moved to Cruiserweight division and set his next win opposed to Tyrone Booze and also won most of the fight. In his last fight for 1985 was versus Anthony Davis, although it was a challenging fight, Holyfield managed to knock out Davis in the fourth round.

At the beginning of the year 1986, his fight was against Chisanda Mutti who was the former world cruiserweight challenger but he handled the fight and won in three rounds by knockout.

After beating some of the fights in Cruiserweight class, Holyfield became the world champion by defeating Dwight Muhammad Qawi by a 15 round split decision.

In 1987, Holyfield has to fight against his former Olympic Teammate and Gold medal winner Henry Tillman, who had beaten Mike Tyson Twice as an amateur. He retained his title in that fight by knocking out in the seventh round and went to fuse his WBA belt with the IBF belt which was held by Ricky Parkey.

The year 1988 was another fecund year for Holyfield, He Universally recognized as World Cruiserweight Champion after victory over the Lineal & WBC Champion Carlos De Leon at Las Vegas.

After Conquering the cruiserweight division, Holyfield announced to pursue the World Heavyweight Championship held by Mike Tyson. His first win as a heavyweight was against James Tillis who was the former Tyson rival.

In addition, Holyfield defeated several former heavyweight challengers such as Michael Dokes, Adilson Rodrigues, and Alex Stewart. In 1990, Holyfield beat Seamus McDonagh and had been Ring Magazine’s number-one contender for two years. He yet to receive a title shot against Tyson in 1990. Before the fight could happen, Mike loses the heavyweight title to Buster Douglas.

Instead of fighting Tyson, Holyfield fought Douglas which was his first title defense. In the third round, Douglas started a combination with a big right uppercut and landed a straight right hand which knocked down Douglas for the count. Holyfield became the new undefeated, Undisputed Heavyweight Champion of the world.

Till 1992, he was able to defend his title against a couple of former world heavyweight champions where he suffered the first scar of his career with a gash opening up over his eye by Larry Holmes.

Holyfield experienced his first loss against Riddick Bowe by a 12-round unanimous decision in Las Vegas and later on November 6, 1993, in a rematch Holyfield got the victory over Bowe which was also considered as one of the most bizarre moments in boxing history. His victory over Bowe helped Holyfield being honored as ABC’s Wide World of Sports Athlete of the year for 1993.

In June 2014, Holyfield announced his final retirement and is currently a boxing adviser to heavyweight prospect Zhang Zhilei. He retired with a professional record of 44 wins, 10 losses, and 2 draws in 57 fights.

Evander Holyfield Net Worth and Earning

A retired professional boxer, Evander Holyfield has an estimated net worth around $100 million. In his time, he used to earn approximately $30 million as a salary from a single fight.

In his entire career of boxing, Holyfield has gathered around $513 million.

Kept side his financial earning from boxing, Holyfield has also earned from various sponsorship.

Evander personal assets also include a mansion and expensive cars.

Holyfield has an elder brother, Bernard Holyfield, who is an actor and dancer. His mother, Annie Holyfield was a runner and exceptional skater from which he inherited his athletic genes. She used to work in a restaurant as a cook to cover her and family expenses. Holyfield’s mother died in a tragic car accident. 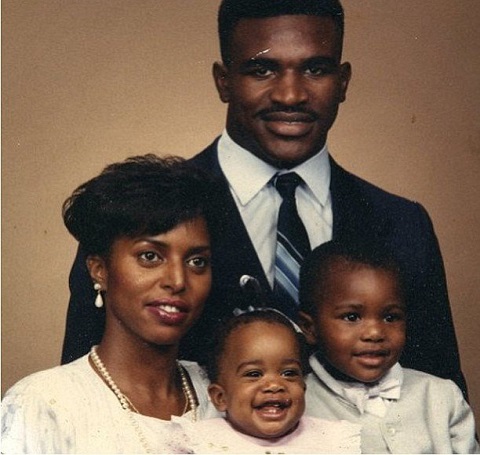 CAPTION: Evander with his first wife Paulette and their kids Evander Jr and Evette
SOURCE: www.bodyheightweight.com

Evander Holyfield had several encounters with 6 different women. His first wife was Paulette Bowen with whom he married on May 17, 1985. However, there married life didn’t last for long and they split in 1991.

Holyfield then married to Janice Itson in 1996 but they failed to find a reason to stay together and separated in 2000. After the second divorce, Holyfield got interconnected to his third wife, Candi Calvana Smith. The new couple exchanged vows in 2003 and like his previous married life history, the duo departed their relation in 2013.

Holyfield has 11 children with six different women. However, the name of three women with whom he had dated has not been disclosed.

Other than being famous as a boxer, Holyfield has also gained 271K followers on his official Twitter account.