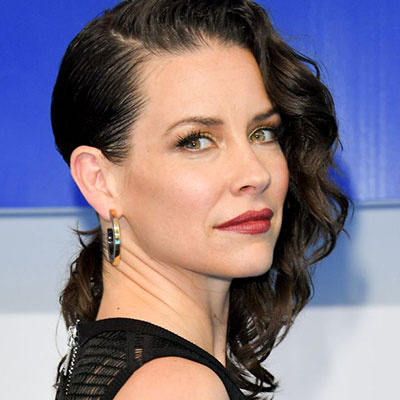 Evangeline Lilly is a Canadian actress and author. She is widely known for her in the American drama television series, Lost, for which she received a Screen Actors Guild Award and a Golden Globe Award nomination.

Well, this beautiful lady is once a married woman. She lived with her husband, Murray Hone for a year and split up eventually. Currently, she is in a relationship with Norman Kali and shares two children together.

Born on 3rd August 1979, Nicole Evangeline Lilly, better known as Evangeline Lilly was raised to Canadian parents with two other sisters in British Columbia. Her father is a product manager that’s why she easily made her entry into the acting field.

Lilly did her schooling from W.J. Secondary School, Abbotsford, British Columbia. She was active in soccer and was the vice-president of the student council in her school days. Later, in her college days, she began working as a waitress and as a flight attendant for Royal Airlines to pay her tuition.

Further, she gradually develops her interest in humanitarian causes and global development that encouraged to earn Major in International Relation from the University of British Columbia.

The 38-years-old actress, Lilly made her acting debut from the American television series, Smallville which was written and produced by Alfred Gough and Miles Millar. The TV series is based on the DC Comics character Superman. Next, she starred in the supernatural drama series, Tru Calling.

Then in the year 2003, she made her appearance in three of the movies: Stealing Singara, The Lizzie McGuire Movie, and Freddy vs. Jason. After playing several uncredited works in movies, she made a lead role in Gilles Bourdos’ directed psychological thriller movie, Afterwards.

Though her role Bailey Tallet in Shawn Levy’s directed science fiction sports movie, Real Steel rose her fame in the Hollywood industry. There she was seen opposite to Hugh Jackman and Dakota Goyo, Anthony Mackie and Kevin Durand. It was one of her successful hit movie that earned the overall collection of $299.3 million all over the world.

After the success of the movie, she gives back-to-back hit movies like The Hobbit series, Ant-Man, and Little Evil. There is a good news for her fans that, she is to join the superhero movie, Untitled Avengers movie based on Marvel Comics which she is still working on and will be released in 2019.

Evangeline Lilly earned numbers of awards and nominations for her role Kate Austen from the TV series, Lost. She received her Screen Actors Guild Award in the year 2005 and several nominations for Teen Choice Awards, National Television Awards, Golden Globe Award, and few others.

Besides this, she has won MTV Movie Awards and Gotham Award from the movie, The Hurt Locker, and The Hobbit: The Desolation of Smaug.

Well, Evangeline Lilly personal life didn’t go as fluently as her professional one as her marriage with Canadian hockey player, Murray Hone didn’t long last. The husband and wife tied a knot in the year 2003. This marital relationship didn’t long last and divorced in the following year 2004.

After she divorced Hone, she began dating Norman Kali and is living in a long-term relationship with him. Together, the beautiful couple shared two children: son Kahekili, on 21st May 2011 and a second child, in October 2015.

Evangeline earns a good sum of money in her career. After working in successful Hollywood movies, and tv series Evangeline Lilly accumulated a huge sum of amount. Additionally, she also receives a decent amount of money from several fashion lines and brands as an endorsement.

Allocating information from several sources as of 2018 it is found out that her current estimated net worth is around $15 million. She is an owner of the Ford Escape car which is one of the best selling cars in the United States.

It is a stylish car with the 2.5-liter turbocharged V6 engine delivering 178 hp packs and the charisma of the SUV characteristics and a mid-size car. There is no doubt she lives a luxurious lifestyle from her earning in the acting profession.