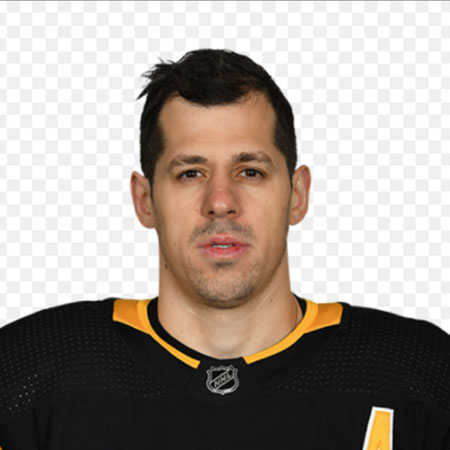 Evgeni Malkin is a professional Russian ice hockey center and alternate captain. He currently plays for  Pittsburgh Penguins of the National Hockey League (NHL). Malkin was picked by Pittsburgh Penguins during 2004 NHL Draft but he made his NHL debut in 2006.

Malkin is married to his girlfriend Anna Kasterova and has a son.

Evgeni Malkin was born on 31st July 1986, in Magnitogorsk, Russia as Evgeni (Yevgeni) Vladimirovich Malkin. He is the son of Vladimir Malkin and Natalia Malkin. Malkin belongs to a Russian nationality. He grew up along with his elder brother Denis Malkin.

At the age of three, Malkin began skating. However, Malkin hasn’t revealed his education background.

At the age of 17, Evgeni Malkin made his debut at Russian Superleague during the 2003-2004 season. Moreover, he further made international debut through the 2003 U-18 World Championships where his team won the bronze medal. Later, Pittsburgh Penguins picked Malkin during 2004 NHL Entry Draft.

However, Malkin wasn’t able to make his NHL debut due to international transfer dispute delayed. So he made his NHL debut after two years in 2006. But Malkin missed the starting games of the season due to a shoulder injury.

Well, Malkin made his NHL debut on 18th October 2006 and scored his first goal against New Jersey Devils. In his first NHL season, Malkin was able to win a  Calder Memorial Trophy as the NHL’s best rookie.

Evgeni Malkin has a successful ice hockey career as well as personal life. The 31 years old ice hockey player Malkin is married to his girlfriend Anna Kasterova who is a Russian television personality. The couple began dating in 2013 and after dating for two years, the couple engaged in November 2015.

After six months of their engagement, the duo welcomed their first child a son Nikita Malkin on 31st May 2016. Likewise, the couple shared their vows in 2016.

Since their wedding, Malkin and Anna are living happily. They are maintaining their profession as well as family and often shares adorable pictures on their Instagram. Besides this, there are no any rumors of their divorce and other extra-marital affairs.

From his professional ice hockey career, Evgeni Malkin has earned an astonishing amount of money. He has played NHL as well as international championships and has won several awards.

In 2016, Malkin had the salary of $9.5 million including $350000 endorsement. Currently, Malkin has an estimated net worth of $35 million. Malkin currently resides in Magnitogorsk house which worth $2.195 million.