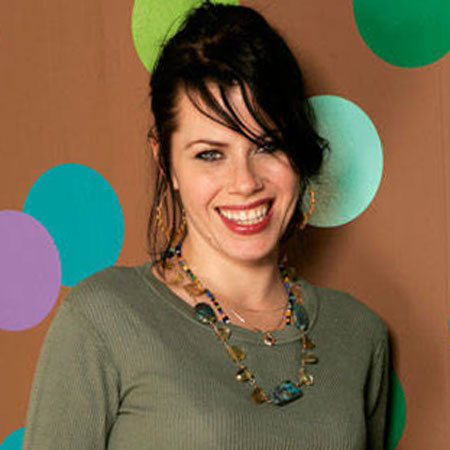 Fairuza Balk is an American actress, renowned for portraying a role of Dorothy in the Disney film, Return to Oz. Similarly, she is also better known for making an appearance in features Gas, The Craft, American History X, the Waterboy, Almost Famous etc.

American actress Fairuza is unmarried till now but previously she was in the relationship with a guy named, David Thewlis.

Fairuza Alejandra Feldthouse was born on 21st May 1974, in Point Reyes, California. She is a daughter of Solomon Feldthouse, father, and Cathryn Balk, mother. Her mother was a traditional dance teacher while the father was a folk musician who worked for the 1960s psychedelic rock group, Kaleidoscope.

Instagram: Fairuza Balk’s childhood photo along with her mother;

Fairuza’s parents split up while she was at the young age. After that, she lived with her mom in North of San Francisco, California on a commune-type ranch.

Having an interest in acting, she made an onscreen appearance at the age of nine in the television film, The Best Christmas Pageant Ever. Right after two years, she appeared in the film Return to Oz from where her professional acting career began.

With a keen interest in an acting, Fairuza landed more tv movies in North America and Europe. Her part in the 1992 film, Gas, Food, Lodging gained her critical recognition and she got more roles in other television movies and film projects including The Craft. Later on, she appeared in movies such as Almost Famous, American History X and Dose of Reality.

Recently in 2017, the emo puppet band called, Fragile Rock performed a song called Fairuza Balk at NPR Tiny Desk Concert. She responded via Twitter stating the song was “wonderful and hilarious”. On the other hand, she also made an appearance in the film Battle Scars and is working for the upcoming movie, Hell Is Where the Home Is.

The gorgeous American actress Fairuza is unmarried till now but previously she was in the relationship with a guy named, David Thewlis.

He is a British actor, director, author, and screenwriter. The couple started dating in 1996 while working on a common project “The Island of Dr. Moreau”. However, their relationship lasted for only a year.

After David, Fairuza linked with an American actor, Crispin Glover. It came to know that they have been spending their time together after she uploaded the status,

Although Fairuza and David were together for certain time, they didn’t reveal as a boyfriend and girlfriend. Neither, any news or rumors were there about their relationship. Currently, she is living a single life and seems to be looking for the right partner to get married.

Talented Fairuza started an acting career at the age of six and began it professionally at nine. Her first onscreen appearance was in the television film, The Best Christmas Pageant Ever as Beth Bradley.

After two years of onscreen debut, she played in the film Return to Oz as Dorothy Gale from where she rose to prominence. In 1996, she won the MTV Movie Award for Best Fight and a nomination for Saturn Award for Best Supporting Actress for her role Nancy Downs in The Craft.

Later on, Fairuza landed on more films and television series. Besides that, she did a voice-over in numbers of animated television series and also made an appearance in the video games. She has accumulated a tremendous amount of money from her professions. Allocating information from several sources as of 2018, it is found out that Fairuza Balk current estimated net worth is around $9 million.