The capturer of our heart, Taylor Swift has earned lots of name and fame in few year of her career. Starting a career at a very young age, this singer has shown her wide range in her singing and has been appreciated and awarded.

It is said that the more we know about Taylor, the more we fall for her. Being one of the most vibrant female singers in the music industry, she has shown a wide range of her singing and great maturity. So do you wanna know more about the star? If yes then here are few interesting facts about Taylor Swift. Stick with us.

Five Facts You Need To Know about Taylor Swift

Taylor Swift was born on 13 December 1989 in Pennsylvania as Taylor Alison Swift. Taylor spent her early year on a Christmas tree farm and attended preschool at Alvernia Montessori School. At the age of 9, she became interested in musical theater.

Taylor Swift- Named After another Singer

Taylor Swift was named after another singer, James Taylor. The two singer ended up sharing the stage in 2011. Taylor gushed about the 25-year-old singer being named after him.

Have you ever noticed, Taylor doesn’t have any permanent tattoo? Taylor Swift said that she wouldn’t get a real tattoo as she doesn’t think that she could commit to anyone saying for the rest of her life. She thought that a real tattoo actually terrifies her.

Also read: Taylor Swift New Song, LOOK WHAT YOU MADE ME DO shatter’s four major records

Taylor usually wears contact lenses just because some year ago she was nearly blind. Taylor has been facing a problem with a problem with her eyes. She wears big chunky glasses when she doesn’t use contact. 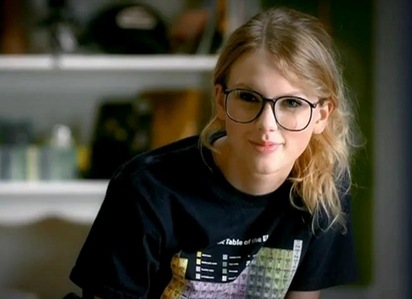 Taylor’s grandmother was an accomplished opera singer and passed on her genes to her country music superstar grandmother.

Also read: The top 10 Songs of Taylor Swift for All Time

It’s true that if Taylor singing doesn’t work out, she might be a novel writer. At the age of 12, she wrote a novel of 350 page.

She said that she’d like to write her own biography. Besides writing the biography, she is also a talented painter.

This is all Five Facts about Taylor Swift. Soon we will be back with other amazing facts and news. Till then keep supporting and visiting us.