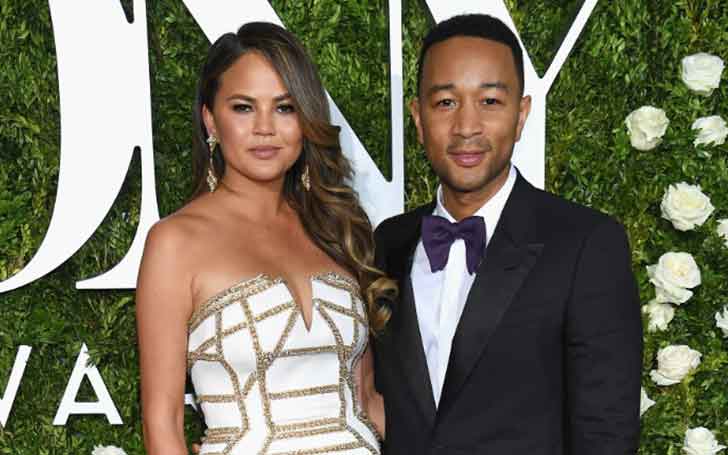 Congratulations are in order for one of the Hollywood’s most loved couple, John Legend and Chrissy Teigen. The two have welcomed a new addition to their family. Well, Teigen recently gave birth to their son on 17th May 2018. So, let’s explore what we know about the baby so far.

Already parents to one, the couple is excited to welcome their baby boy. The good news has left their fans in awe. In this digest, we will also discuss their love story, relationship, affair, children and more, so, stay tuned. If you also want to learn the name of the newest member of the Legend household, keep scrolling.

Words out! Chrissy Teigen has given birth to an adorable baby boy. The model took to Twitter on 17th May 2018, to announce the birth of their baby. John Legend then retweeted the tweet. In her most recent post on Instagram, Teigen posted a picture of the baby and also revealed his name.

The name of the new member is Miles Theodore Stephens. You can take a look below.

The All of me singer recently attended the red carpet of Billboard Music Awards where he dished out the inspiration of the new born’s name. He stated that the name was inspired by the music artist Miles Davis.

As for the middle name, Teigen had a say in it. While Legend was in the award show, his wife hilariously tweeted “wow didn’t u just have a baby John smh go take care of it !!!!!! disgusting“. Well, this is the kind of leg pulling and hilarity we expect from the couple.

The baby has arrived a few weeks earlier than expected as the due date was in the month of June. This must come as a relief to Teigen since just a few days before she had tweeted about how she was done with the pregnancy and wanted to hold her baby already. The couple and their daughter Luna are more than happy with the baby’s arrival.

John Legend and his wife, Chrissy Teigen first met back in 2007 during a music video shoot for Legend’s song, Stereo. The two were not exclusive right away but eventually began dating to become boyfriend and girlfriend.

Legend then purposed his girlfriend Teigen during a Christmas trip to the Maldives in 2011 to which Teigen said yes. They got married on 14th September 2013, in Lake Como, Italy.

The couple has an adorable bond. The two are supportive of each other and have a great sense of humor. They are a fun couple who joke around and don’t take themselves seriously. Legend and Teigen are now parents of two.

Their first child Luna Simone Stephens was born on 14th April 2016. The couple struggled with infertility issues for some time before finally having Luna.

Now, their happiness has increased as the family welcomed a new baby boy. So far, Teigen’s postpartum life has been going well as she mentioned in a tweet. We are still to see Luna’s reaction to the new baby. Keep up with dodoodad to get more information in coming days.