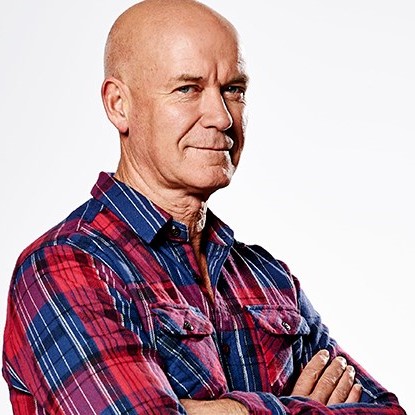 The Most Popular and Outstanding Award winner in 1992, Gary Sweet is widely recognized for The Chronicles of Narnia: The Voyage of the Dawn Treader in 2010. Other notable appearance includes as Steve in Alexandra’s Project, like Mickey in “Police Rescue” and as Lewis Crabb in “House Husbands.”

Gary has married trice till now. Firstly, he married Lenore Smith in 1981. Then he married Jill Miller in 1987. Afterward, he got married to long-term girlfriend, Johanna Griggs in 1995. Currently, he is living with his partner Nadia Dyall with whom he has two children.

Gary Sweet was born on 22nd May 1957 in Melbourne, Victoria, Australia. He was raised in Warradale, Australia. He belongs to white ethnicity and holds an Australian nationality.

He joined Brighton High School in Adelaide and achieved a degree at Sturt Teacher’s College in 1979. He enrolled at the Flinders University and completed his BED program in 1980.

Gary Sweet started his early career from a minor role in the horror movie “Nightmares”. Later, he appeared in  Crawfords television series “The Sullivans” as Leslie ‘Magpie which makes him quite popular in the television industry.

In 1984, Gary appeared as Donald Bradman in miniseries “Bodyline” which help to uplift his career tremendously. Gary stardom rises between 1990 and 1996, appeared in the drama series “Police Rescue” as Sgt.Steve “Mickey” McClintock which led him to win various major awards.

Later, he was starred in many notable films such as “The Tumbler” as Hurtle Hamilton in 2008, The Chronicles of Narnia: The Voyage of the Dawn Treader as Lord Drinian in 2009 and “The Telegram Man” as John Lewis in 2010.

Gary reached to the final seven as a contestant on “Dancing with the Stars” where his partner was Eliza Campagna.

In 2008, Gary was the narrator of the Australian observational documentary TV series “Sudden Impact” which was broadcast on the Nine Network.

Moreover, Gary is also recognized as a stage artist. He has appeared in various stage productions such as  David Williamson’s The Club, FrabkieValli-tribute musical “Oh, What a Night“. He also appeared in Trevor Ashley‘s musical comedy “Little Orphan trAshley”.

Furthermore, Gary is also best known for the Billy Thorpe‘s cover song “Most People I Know (Think That I’m Crazy) released in 1994. The single was successful in reaching at number 52 on the ArIA singles chart.

Gary is an ambassador of the Australian rules football club and also associated with the Manly Sea Eagles rugby league club.

He also achieved an honor as an induction into the Australian Film Walk of Fame in 2011.

Gary Sweet is a famous Hollywood personality who is in the limelight due to his previous marriage records. According to the source, he has married thrice. He got married to his first wife, Lenore Smith in 1981. But, due to some personal problem, they decided to separate from each other and divorced in 1983.

His second wife is Jill Miller who is a lawyer. Together, they gave birth to two children named Frank Sweet and Sophie Sweet. Jill Miller and Gary Sweet got married in 1987. There is no revelation about their divorce date, but the pair lived separately now.

In 1995, he got married to long-term girlfriend, Johanna Griggs. She is best known as television presenter and former Commonwealth Games swimmer. They were happily married for four years. The pair split and filed a divorce in 1999. They are parents of two children, Jesse James and Joey Buster.

At present, Gary Sweet is living with partner Nadia Dyall. The couple is blessed with a son called, Frederic George. Recently the couple welcomed their second son.

As an established Australian Actor, Gary has starred in many popular films and television series from which he earns an enormous salary. He has achieved the role in various critically acclaimed television series and movies. Due to his dedication and hard works, he has received some awards.

With all his acting skills and hard work, Gary has added a lot amount of money in his net worth. He earns excessive from his profession and is successful to accumulate the estimated net worth of $3 million.