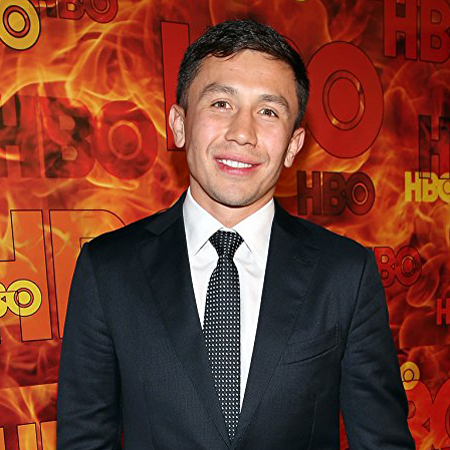 Gennady Golovkin is a professional Kazakhstani boxer who holds the unified titles including WBA (Super), WBC, IBF, and IBO middleweight. Golovkin is widely known by his nickname “GGG” or “Triple G”.

The Ring has ranked him the world’s best active boxer, pound for pound and second by ESPN and third by BoxRec and TBRB. Golovkin is married to Alina Golovkina and has a son named Vadim Golovkin.

Each and every day, Golovkin used to fight with different guys. When Golovkin was nine years old, both of his brothers joined the  Soviet Army. In 1990, the government reported Govokin’s family about the death of Vadim and again the death of Sergey in 1994.

Golovkin joined the gym at Maikuduk, Kazakhstan and learned boxing with Victor Dmitriev.

In November 2002, Golovkin earned a scholarship with Olympic Solidarity program. He won the gold medal at 2003 World Amateur Boxing Championships in Bangkok. Likewise, at the 2004 Summer Olympics, Golovkin defeated Ramadan Yasser but he just received a silver medal after being defeated by Andre Dirrell.

Furthermore, Golovkin won a gold medal at the 2004 Asian Amateur Boxing Championships in Puerto Princesa, Philippines and was also qualified for the Athens Games. However, at the world championship 2005, he lost the match to Mohamed Hikal.

He ended his amateur career in 2005 and signed a professional deal with the Universum Box-Promotion. In May 2006, Golovkin made his professional boxing debut. Within a few wins over boxers, Golovkin was regarded as one of the best prospects in the world.

This is boxing.
This is the middleweight world champion.
This is #RE2PECT.@GGGBoxing pic.twitter.com/E37WNwofRR

Afterward, Golovkin determined to become well-known worldwide by fighting in Madison Square Garden and Staples Center. So, he moved to the US and signed with K2 Promotions and started his training at Big Bear, California along with Abel Sanchez.

On 20th July 2012, Golovkin was announced to fight against Grzegorz Proksa, the European champion, and The Ring‘s no. 10-rated middleweight. The fight was scheduled to be held on 1st September 2012 at Turning Stone Casino in Verona, New York.

The fight was televisioned through the HBO on the United States and through Sky Sports in the UK. In the following match, Golovkin was able to earn a victory over Grzegorz Proksa in the fifth-round TKO with a knockout which was the first loss of Proksa in a knockout. After the fight, Proksa praised the power of Glolvkin.

He further fought with Gabriel Rosado and got the victory with stoppage-streak TKO victory. In the same way, Golovkin fought against the former WBA interim super welterweight champion Nobuhiro Ishida. Golovkin became the first one to knock out Ishida by finishing him in the third round.

On 29th June 2013, Golovkin fought against Matthew Macklin at MGM Grand at Foxwoods Resort in Mashantucket which was officially announced on April. In the following fight, Macklin was defeated in the third round and Golovkin retained his WBA and IBO world titles.

After tenth successful title defenses, Golovkin was officially promoted to Super champion from Middleweight champion on 3rd June 2014, by World Boxing Association. He was further granted permission to defend his title against Daniel Geale.

Just after a month of his promotion to the Super Champion, Golovkin fought against The Ring’s #2-rated middleweight Daniel Geale. Golovkin successfully won his eleventh title by defeating Geale via a third-round stoppage.

On 17th October 2015, Golovkin fought against the IBF world champion David Lemieux. He continued his victory via eighth-round technical knockout. Along with the victory, Golovkin unified his WBA (Super), IBO, and WBC Interim middleweight titles with Lemieux’s IBF title.

Golovkin continued his victory by defeating Dominic Wade on 23rd April 2016. In the same year, on 10th September 2016, he fought against the undefeated British IBF Welterweight Champion Kell Brook and grabbed his 17th world title defense.

Immediately after the victory over Brook, Golovkin was announced to fight against Daniel Jacobs. The match was held on 18th March 2017, at Madison Square Garden in New York City and Golovkin further gained the victory over Jacobs.

However, the final decision of the fight between Golovkin and Canelo Álvarez, held on 17th September 2017, was finalized later as the match ended in a draw.

35 years old Gennady Golovkin has equally gained success in his professional as well as personal life. Golovkin is married to his long-term girlfriend Alina Golovkina and has a son named Vadim Golovkin. His son is in primary school.

After getting married, Golovkins is maintaining his professional as well as personal life smoothly. He enjoys playing games with his son and spending time with family. It’s been several years since they tied the knot and there is no any rumors and sign of their divorce till now.

A professional boxer Gennady Golovkin earns a decent amount of money from his boxing career. In the fight against Matthew Macklin, he earned $350,000 and $2 million in the match against Dominic Wade.

Golovkin won several fights and earned huge several medals and a tremendous amount of bout. Till now he has won 37 titles and there is no any record of his loss. Allocating information from several sources as of 2018, it is found out that Gennady Golovkin current estimated net worth is around $7 million.