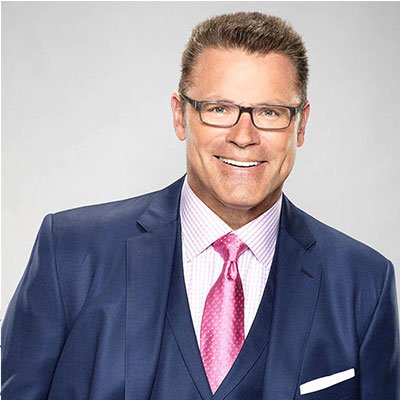 Howie Long is one of the renowned American personalities. He is an actor, sports analyst, and former National Football League’s defensive end. He is better known for being 8-time Pro Bowler and one-time Defensive Player of the Year.

Howie Long is married to his long-term dated girlfriend, Diane Addonizio with whom he shares three sons. To know more about his personal life, education, career, salary and net worth. Read more

Howie Matthew Moses Long was born on January 6, 1960, in Somerville, Massachusetts. Long attended Milford High School where he started playing football. Besides football, he also played basketball for three years as a forward and track including, shot put, javelin, and discus.

Later on, Long joined Villanova University where he met his life partner, Diane Addonizio. There, he got selected to play in Blue-Gray Football Classic. As a freshman, he had 99 tackles and as a sophomore, he recorded 78 tackles in sacks with five.

Moreover, he won All-East honors and All-American by his senior year. Not only that, he boxed at Villanova and became Northern Collegiate Heavyweight Boxing Champion.

Howie Long made his professional NFL Debut in 1981 after he was selected in the second round of 1981 NFL Draft. He played with Oakland Raiders for almost 12 years and within that time, he became eight-time Pro Bowl champion, three-time First-team All-Pro, NFL Defensive Player of the Year, SuperBowl Champion and so on.

Tall and talented, Howie Long retired from football in the 1993 season. After that, he then made appearances in television shows and commercials. Moreover, he also got engaged in films works such as Broken Arrow, Dollar for the Dead, Firestorm and so on. Currently, he serves as a studio analyst for Fox Sports’ NFL coverage.

Howie Long is happily married to a beautiful woman, Diane Addonizio. The two tied the knot on June 27, 1982. The pair first met each other back at the Villanova University.

Long and his wife are blessed with three children, Chris Long, Kyle and Howard Jr. Born on March 28, 1985, December 5, 1988, and in 1990 respectively. His all sons are also involved in sports. Chris Long plays defensive end for Philadelphia Eagles whereas Kyle Long is the guard for the Chicago Bears. And Howard Long Jr. is involved in football operations with the Oakland Raiders.

As a footballer, actor, and sports analyst, Howie Long has accumulated a huge amount of money. Till the present context, he has appeared in the numbers of movies including, Broken Arrow, Firestorm, Dollar of the Dead, and so on.  Besides, he also made appearances on commercials and television shows. Some of his national commercials and advertising campaigns include Nike, Coca-Cola, Taco Bell, Pizza Hut and many more.

Howie Long owns $6 million house which is situated in Virginia.

As of 2018, this talented and hard-working personality’s net worth is estimated at around $16 million.