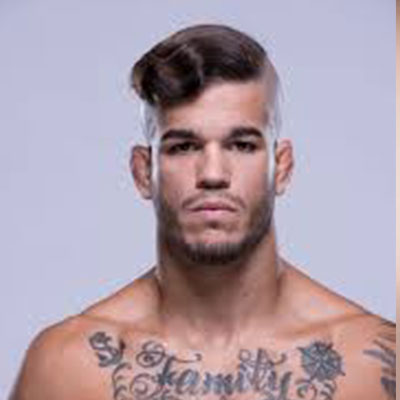 Jaime Alvarez is in a romantic relationship with Jessie Martinez. Jaime is godfather to two of his niece, he particularly enjoys spending time with his goddaughter Gabriella Jorge Alvarez.

Jaime Alvarez was born in Hollywood, Florida, the United States on March 3rd, 1988. He spent most part of his childhood in Florida. In middle and high school he was on the track, soccer and American football team.

Alvarez says that he was bullied in school and that is what got him interested in fighting. He cites his father as his hero. After completing high school, Jamie went to the University where he majored in Business Administration. He began training for the MMA after his university graduation.

Jaime Alvarez started training in 2012 after he finished his undergraduate degree. Before coming into professional MMA matches, Alvarez fought in amateur championships. He remained undefeated during his amateur career with a score of 7 wins.

Another victory tonight!! Can’t thank everyone enough who have supported me every step of the way. From family, friends, coaches, teammates everybody this would not be possible without you all at my side! #americantopteam #AmericanTopTeamHQ #att #afc #wrestling #bjj #mma

On August 23rd, 2013, Jaime won the fight against Jason Leon via unanimous decision at Fight Time 16 – Rocha vs. Barroso. And on January 2nd, 2014 he was matched against Mike Hamman at Fight Time 18; Guts & Glory. Alvarez won the match via KO/TKO.

His next match was scheduled with Jimmy Alexander but the bout was canceled out on two occasions. Jaime’s next bout was with Jeremiah Davenport at Bantamweight’s Absolute FC 22. Alvarez won the fight via submission.

He suffered his first loss by the hand of Abdiel Velazquez at HOF: Nations Collide Flyweight on January 29th, 2016. After his first loss, he faced Shane Tyne at Flyweight’s Absolute Fighting Championship 24 and won the fight.

#tbt can’t wait to have this feeling again. Preparing my mind and body for March 13 #HOF can’t wait to showcase my skills and finish another opponent

Jaime Alvarez faced loss in his next bout with Brazil’s Ronaldo Candido at exhibition bout of The Ultimate Fighter Season 24. And then he faced Martin Day at DW’s Contender Series 2017: Week 6 which he won. Alvarez’s match with Jorge Calvo Martin which was scheduled on April 4th, 2018 was canceled.

Jaime Alvarez is in a romantic relationship with Jessie Martinez. The couple can be seen spending many happy times together on Jamie’s Instagram page.

Alvarez has not disclosed his earnings, salaries or net worth just yet. But the MMA player with multiple wins in his bag must have accumulated a handsome sum of money through his bouts, win bonus, and titles that he carries.

Furthermore, he is seen going to various exotic places with his family members, goddaughters, and girlfriend. He must have a decent earning to quench his wanderlust. He owns a Chiwawa which costs about $400-$500 USD.