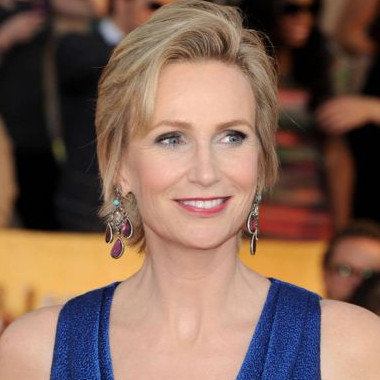 Jane Lynch is an Emmy and Golden Globe-Award winning actress, singer, and comedian. She is best known for portraying Coach Sue Sylvester in the series “Glee” and Christy Cummings in “Best in Show”. She guest appeared on various TV sitcoms, including “3rd Rock from the Sun,” “MDs,” “The 40-Year-Old Virgin” and “Two and a Half Men.”

Jane Marie Lynch was born on 14 July 1960, in Dolton, Illinois, the United States. Growing up outside of Chicago, she found her affection for acting in the third grade when she played a minor role in the school production. During her high school years, Lynch used to take part in the choir and performed in school plays, however, most of the time she likes to keep under the radar. 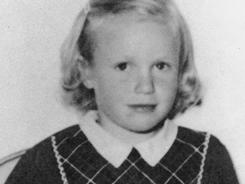 Jane Lynch in a family photograph from her book, ‘Happy Accidents.’

Shortly after graduating high school, Lynch studied acting at Illinois State University. then kept on sharpening her specialty at Cornell University’s graduate program for acting in New York. She then moved returned to Illinois after earning MFA and immersed herself in the Chicago theater scene. There, Lynch worked with such well-known groups as the Second City Touring Company and the Steppenwolf Theatre Company. One of her most celebrated theatrical roles was playing Carol Brady in “The Real Live Brady Bunch”. 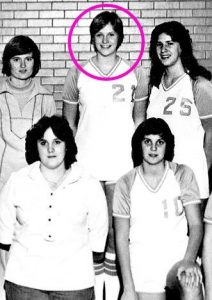 Lynch made her film debut in the 1988 comedy film “Vice Versa” alongside Fred Savage and Judge Reinhold. Followed by minor roles in such movies as “The Fugitive” and “Straight Talk.” Lynch also guest appeared on various TV sitcoms, such as “3rd Rock from the Sun” and “Married with Children”.

She also did commercials for Christopher Guest-directed Frosted Flakes advertisement. Months later, Guest signed Lynch to play in “Best in Shows” as Christy Cummings, a tough dog trainer who gets involved with a dog owner (Jennifer Coolidge). 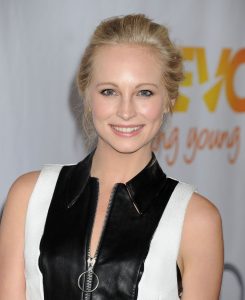 Lynch during her teens

While regularly handling minor roles, Lynch made various memorable guest appearances on such shows as “Desperate Housewives”, “Weeds” and “Arrested Development”. In 2005, Lynch played as a graceless store manager in “The 40-Year-Old Virgin” alongside Steve Carell, nailing almost every scene she showed up in.

In 2006, Lynch appeared in “Talladega Nights: The Ballad of Ricky Bobby” as the mother of a race car driver, starring Will Farrell. She also starred in her own 13 episodes long sitcom, “Lovespring International.”

She also appeared in the film that follows the lives of few gay women called “The L Word.” On the show, Lunch played Joyce Wischnia, an extreme legal counselor who falls for her client (played by Cybill Shepherd) while taking care for her divorce. As a lesbian herself, Lynch particularly appreciated how the series portrayed the life of a lesbian. 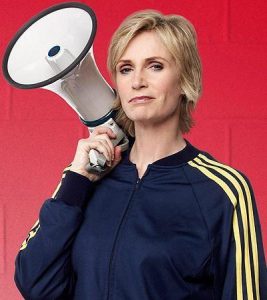 During this time, Lynch additionally had another different recurring role, playing Charlie Sheen’s therapist on the hit sitcom “Two and a Half Men”. She then starred in the critically acclaimed 2009 comedy “Party Down.” That same year, Lynch got her most famous role as Sue Sylvester, a super-intense cheerleading coach, on “Glee”. Lynch recall playing the role, saying that Sylvester “is so cold and ruthless.”

Lynch sang “Vogue” during a special episode that fused the songs of Madonna. In 2010, Lynch won the Emmy Award nomination for Outstanding Supporting Actress in a Comedy Series for her performance in “Glee”. She also received a nomination for her guest appearance on “Two and a Half Men”. In 2013, she decided to try her luck as the host of NBC’s “Hollywood Game Night” and eventually earned two Emmys for her work. 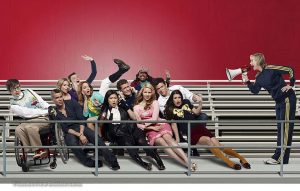 Openly lesbian; Lynch was dubbed as one of Power Up’s “10 Amazing Gay Women in Showbiz” in 2005. Lynch married Lara Embry, a clinical psychologist, on 31 May 2010, in Sunderland, Massachusetts. The couple first met a year earlier at a fundraiser in San Francisco. The couple adopted a daughter named Haden. In June 2013, Lynch announced that she and Embry were divorcing after three years of marriage. The divorce was finalized in January 2014. 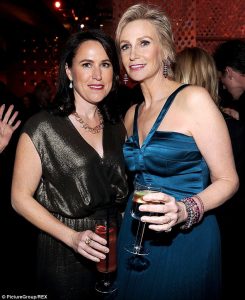 Lynch is deaf in her right ear due to nerve damage. On July 19, 2013, she speculated to Craig Ferguson on The Late Late Show that the deafness in that ear was most likely caused by having had a high fever as an infant.