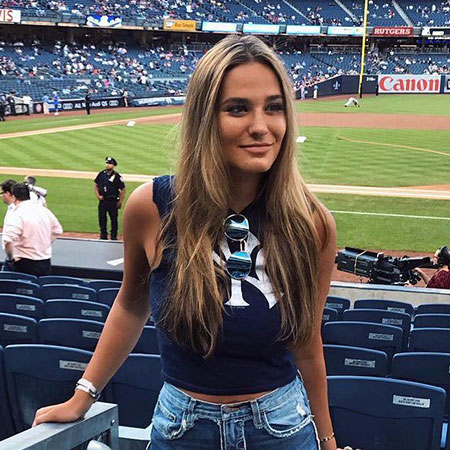 Jen Flaum is an Instagram star and model who is known for posting her lifestyle-related content along with her two siblings, parents, and friends on Instagram. Further, she is also known for dating Yankee’s Aaron Judge.

Currently, the net worth of Flaum is estimated to be around $500 thousand. As of 2018, Flaum is reportedly single and hasn’t dated anyone after her break-up with ex-boyfriend Aaron Judge.

Jen Flaum Net Worth and Salary

Jen Flaum earns a decent sum of money as a social media star. As of now, Flaum has an estimated net worth of around $500 thousand. She currently works as an assistant manager for Horizon Media and earns an average salary of around $32,640 annually.

However, Flaum’s ex-boyfriend Aaron Judge’s net worth is estimated to be around $10 million and the famous Yankee star received a signing bonus of $1.8 million from his recently penned contract with the MLB club Newyork Yankees.

Likewise, Judge receives a monthly salary of around $507,500. Further, Judge bought a luxury house in 2016, for around $1 million. The Yankees superstar has two luxury cars.

Though the couple was dating each other secretly, one of Jen’s Instagram follower reportedly leaked a photograph of her and Aaron which later became the main reason behind Flaum turning her Instagram page into private settings.

Later, they were spotted going on a date in a Nobu restaurant in New York. Further, in 2017‘s Halloween, Flaum and Judge uploaded a picture together dressed up as Superman and Lois Lane. Sadly the picture was later turned down after their break-up.

Flaum received an extensive hate from Aaron’s fan after their pictures were leaked from Jen’s Instagram. Aaron’s fans directly linked Jan for the leakage of her pictures with Aaron and allegedly blamed Flaum of executing the leakage for media attention and fame Flaum and Judge separated in 2018.

As we all know that Flaum was such a big fan of Yankee but now she is not. But she’s still pretty interested in keeping an eye on the Yankee superstar.

Jen Flaum was born on 28th May 1995, in New Jersey, United States, to Matthew Flaum and Nancy Flaum. Flaum holds an American nationality and belongs to white ethnicity. Her birth sign is Gemini. Flaum grew up alongside her two twin siblings Andrew Flaum and Matthew Flaum.

In 2013, Flaum graduated from Ramapo High School located in Franklin Lake, New Jersey. Likewise, for her higher studies, she joined the University of Michigan from where she received her Bachelor of Arts degree in Psychology and marketing.

After finishing the degree Jen Flaum interned for two months for Fisher Brother as a promoting understudy in 2014, Flaum was accepted as an assistant for Private Wealth Management in Morgan Stanley.

Subsequently, after finishing her internship at the Fisher Brothers, Flaum was accepted as an intern for Mediavest|Spark as a strategy intern. She interned there from June 2016 to August 2017. Presently, Flaum is working as an assistant manager for the Horizon Media.