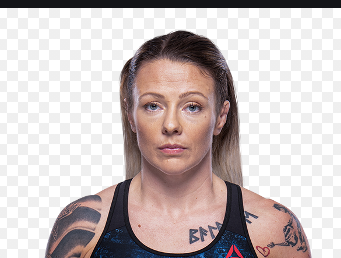 Joanne Calderwood, also known as Jojo, is a professional mixed martial arts fighter who competes in the Women’s Flyweight division of UFC. She is the former Muay Thai champion and the first Scottish woman to go pro in mixed martial arts.

Joanne is currently in a relationship with a mystery man. She has not completely disclosed the identity of her lover however she has shared photos of them together.

Joanne Calderwood was born on 23rd December 1986, in Irvine, Scotland. She also has a younger brother. Calderwood started training in Muay Thai when she was 13 years old. It was only supposed to be a one-time thing as she accompanied her brother to the class.

However, she fell in love with Muay Thai and convinced her mother Jeannette Calderwood, to continue the classes.

As Calderwood was growing up, she worked several jobs. She eventually found another gym and decided to leave her job since it was hampering her training. Nevertheless, her commitment to Muay Thai eventually paid off.

Joanne Calderwood began her career in 2000. She was named STBA Fighter of the year in 2009. She is ranked #2 in the world by the World Professional Muaythai Federation. Her last Muay Thai bout was in September 2012. She has a record of 19-2-0.

Furthermore, on 11 December it was announced that Calderwood was signed the UFC to compete in The Ultimate Fighter. However, she was defeated by Rose Namajunas in the quarterfinals.

After that, Calderwood has been playing under the Strawweight division and flyweight division. She has a record of 11 wins and 3 losses. She has won bouts against Seohee Ham, Valerie Letourneau, and Bec Rawlings. On the contrary, she has lost to Maryna Moroz, Paige VanZant, and Jessica Andrade.

Joanne Calderwood is currently in a relationship with a mystery man. She has shared a few pictures of them together on her social media. However, the identity of the man is unknown. The couple looks happy together. Calderwood is not married yet.

Before this, Calderwood was in a long-term relationship with her then head coach. The two got separated after being together for about seven years. Eventually, they stopped working together. Nevertheless, Calderwood seems to be happy with her new man now.

Furthermore, Calderwood owns a Honda Civic which costs around $19,000. She has been sponsored by Mr gaffer tape. She lives a comfortable lifestyle and spends most of her time in the gym. She is still active in her career so we can assume that her net worth will rise in coming days.