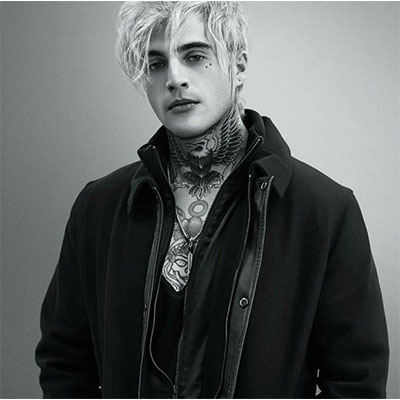 Johnny Stevens is a famous American pop singer who is the lead singer of the band, Highly Suspect. The band has released two studio albums, Mister Asylum, The Boy Who Died Wolf and many other hit albums.

Currently dating girlfriend Kydids, Steven plays guitar and synthesizer for the band too. He shares his relationship matter via his songs. Most of his songs are related to his affairs, girlfriends, ex-girlfriends, and dating history.

Stevens was born on 10th April 1986 in Massachusetts, USA. Having a very punk attitude since early childhood, Steven was magnetic towards rock music and was determined to pursue a career on the same line of his passion.

To support his early life, Johnny used to work as a local plumber before and also during the initial stages of the new band. The trio also attended the same high school, Dennis-Yarmouth Regional High School.

Johnny Steven co-founded the band, Highly Suspect, with the twins Rich and Ryan Meyer in the year 2009. Initially, most of their gigs were on their hometown Cape Cod, Massachusetts, where they played cover songs of rock and pop legends, Jimi Hendrix, Sublime and Pink Floyd. These bands were their idol and foundation from which they assembled their own band Highly Suspect.

First Offence was the band very first EP, an EP or Extended play record is a record which has more tracks than singles but falls short to be classified as an album, released on 15th July 2009.

They released the band’s second EP in 3rd October 2010 named The Gang Lion EP. After a year break, Highly Suspect released their third EP, The Worst Human and fourth, Black Ocean, in October 2013.

The trio released their first album in 2011 entitled Highly Suspect, which is a compilation of their some of the old songs and new music as well. The album consists of 14 tracks. The triad traveled around the USA in early 2015.

The band has released two studio albums, Mister Asylum in 2015 and The Boy Who Died Wolf on 18th November 2016.

The handsome singer, who has a macho Eagle tattoo on his neck is highly elusive about his personal life. However, through interviews and lyrics of his songs, we can conclude that he has been involved with several women.

Currently, even though he is dating, he has maintained a hue of mystery about his current girlfriend. The rising vocalist did say that the words of his song Chicago is about his shaky relationship with his girlfriend and is dedicated to her.

All that is known about Johnny’s current girlfriend is that she goes by the Instagram handle @Kydids, where she posted a picture with the singer.

Similarly, the lyrics of his song Lydia was inspired by his ex-girlfriend. Very controversially Johnny admitted that the band uses drugs during their recordings and also during their writing session, primarily Heroin.

Though no official declaration of Stevens’ net worth or salary has been made yet, the band must be earning well enough through their multiple concerts and gigs. Johnny surely has a million dollars net worth.