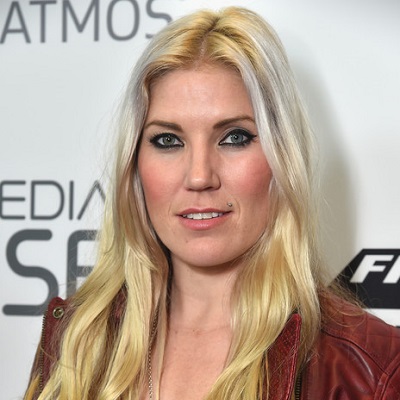 Jolene Van Vugt is a professional Canadian motocross racer. She is the first CMRC Women’s Canadian Motocross National Champion as well as the first woman to backflip a full-sized dirt bike. Till now, he is able to hold lots of Guinness Book World record.

Furthermore, Jolene Van is also the co-host of many stunt videos. She tied the knot with Jim DeChamp in 2013 and the couple is also blessed with a daughter.

Jolene Van Vugt was born on 17th September 1980, London, Canada. She was born to Bill Van Vugt and Tina Van Vugt. Her father was also a motocross racer. Vagt grew up along with her brother Billy and sister  Michelle.

Within her childhood, she was influenced in racing from her father. However, there is no any information regarding her education background.

As she was heavily influenced towards bike racing from her father, her mother wanted her to be a figure skater or a ballerina. However, she decided to be a professional motocross racer. Well, at the age of 11 she requested her father to buy a dirt bike for her.

But there was still a debate regarding her hobbies and career. So, at the age of 14, her parents gave her the ultimatum either to give her full priority to racing or giving it up.

Well, Vague decided to give her full attention to the motocross racing and started practicing. Within, a short period of time she rose in the top 10 ranks of Canadian women’s motocross. She earned an Ontario Provincial Championships for several times.

Furthermore, she also earned the 9th place in the WMA. Besides this, she also participated in other championships including Loretta Lynn’s Amateur National, TransCan Canadian Amateur Grand National Championship etc.

Since 2006, she still appears on the television show Nitro Circus. The show was originally broadcasted by the  Fuel TV. However, these days, it is broadcasted by the MTV. Furthermore, in 2012 she performed stunts in the movies named The Dark Knight Rises.

However, in 2015, Vugt faced a serious injury while attempting to do ramp jump using a slingshot. Well, after the following injury she required doing multiple surgeries in her face and took several times to recover.

Along with her professional career, she has equally maintained her married life too. Well, she tied her knot with Jim DeChamp in 2013.

Jim is an American TV personality known for his show Nitro Circus. This couple also has a daughter named Addy.

This couple is happily enjoying their married as well as family life. They often make appearances in public and on different shows. Besides this, Vugt also dated Travis Pastrana and Ryan St. Amand. She is Canadian by her nationality and her ethnicity is white.

Many Gueniss World Record holder with a great personality Jolene Van Vugt earns a huge sum of money in her career. She has won several races and tournaments through which she receives a good sum of money.

Moreover, Jolene also receives a decent amount of money from several fashion lines and brands as an endorsement. Allocating information from several sources as of 2018 it is found out that Jolene Van Vugt current estimated net worth is around $2 million. She is also active on social sites like Instagram with 235k followers, Twitter with 87.5k followers and Facebook with 353,783 followers.