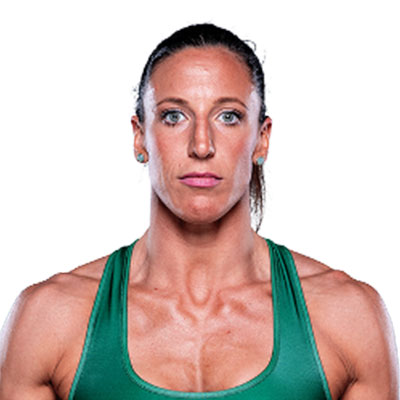 The Canadian kickboxing champion and star of female MMA, Julia Budd’s name is widely recognized after she defeated the former heroine, Gina Carano. She has bagged the title of Bellator Women’s Featherweight Championship.

Known as “The Jewel” in MMA, Julia Budd is married to her coach and former MAA champion, Lance Gibson.

Born on 4th July 1983, in Roberts Creek, British Columbia, Canada, Julia was a very athletic person since her early days.

In an interview with the province, she narrated the story of how she was invested in martial arts. Julia says that she was never particularly interested in team sports and she preferred isolation. However, she still wanted to play something to keep her body fit and active. Subsequently, since the tender age of 15, she began training for martial arts.

Initially, she trained with Lance Gibson’s student on Sunshine Coast and trough that connection she started to come to Gibson’s gym to spar along. Later after taking a shine to her, Lance started to be her official mentor. She is officially trained in Muay Thai and has attended the University of British Columbia.

Julia Budd rose to fame after she defeated the American champion, Gina Carano. She became the only woman who had defeated Gina in a Muay Thai competition.

In 2008, she started to train for the MMA and made her MMA debut on 22nd October 2010, at Strikeforce Challengers 11. She won the match by winning to Shana Nelson in the second round.

In her early career, Julia had lost to Germaine de Randamie but in 2011, she avenged her defeat in the former match by securing a unanimous vote. She played her last match for Strikeforce in November 2011.

After her Strikeforce career, she signed to Invicta Fighting Championships. She made her debut on 28th July 2012 by defeating her opponent Elina Nilsson, a Swedish champion. Her second match in Invicta was on 6th October 2012. Budd was matched against Danielle West. Julia won the match.

Julia, on 19th March 2013 faced Mollie Estes at Invicta FC 5. Saton was defeated by Julia in the third round.  At Invicta FC 6, Julia was scheduled to face Ediane Gomes but had to withdraw due to a neck injury. However, she won the Invicta FC 7.

Budd was signed by Bellator MMA. In Bellator, she has won all her matches. In her debut match for Bellator, Julia defeated Gabrielle Holloway. Julia again defeated Arlene Blencowe on 21st October 2016 and she was matched against Marloes Coenen for Bellator’s inaugural women’s featherweight championship in 2017.

Julia’s recent win was against Arlene Blencowe for her title defense and won the match.

The heroine of the MMA is married to her mentor/coach, Lance Gibson.

Lance and Budd started dating after Julia began to start taking lessons with Lance. Soon their friendship turned into a relationship. They are married for 5 years and before marriage, they dated for 10 long years.

Julia Budd earns the salary of $11,500 USD per match she plays. Herself being immensely successful in her career and married to the former star of MMA, the couple must be living a very fine lifestyle. She and her husband own a corgi and a husky.

Moreover, Julia also receives a good sum of money from brands as an endorsement. Allocating information from several sources as of 2018 it is found out that Julia current estiamted net worth is around a million dollar.