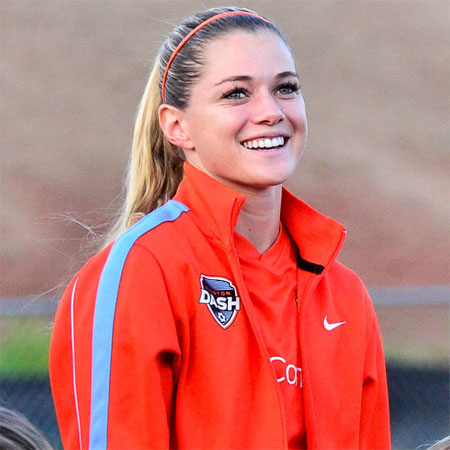 Kealia Ohai is an American soccer player. She is well known for winning the Four-State Championships at Utah’s Alta High. Currently, Kealia Ohai is the captain of Houston Dash. Similarly, she is also a part of the United States Women’s National Soccer Team.

Kealia Ohai is unmarried but, she is in a relationship J. J. Watt, an American football defensive player. The couple met through Kealia’s sister Mega. In 2017, Kealia confirmed on the 2 Up Front podcasts about their relationship.

Kealia Ohai was born on 31st January 1992 in Draper, Utah United States. She is the daughter of Ben Ohai and Cindy Ohai. She has a sister named, Megan Ohai, a retired youth national team member.

Regarding her education, Kealia Ohai studied at Alta High School, where she was a four-year varsity soccer player. Then, she attended the University of North Carolina.

Ohai began to play soccer from her high school days, where she became a 4-year varsity soccer player. Moreover, she guided her team from 2006 to 2009 for soccer championships. Later on, she played for the Utah Avalanche.

Ohai’s professional career began in 2010 while she joined Tar Heels. In 2012, Kealia Ohai rose as a remarkable offensive player during NCAA Division I Women’s Soccer Championship. The team finished up winning the 2012 champions trophy. As a result, all honor goes to Ohai’s winning goal in the semi-final and first goal of the final.

In 2014, Kealia Ohai began her senior career with the Houston Dash, and she is still working well. As of now, Kealia Ohai scored 17 goals in 60 apps. Additionally, she was the member of the 2012 USU-20 Women’s National Team.

Currently, Ohai is a caption of Houston Dash. Moreover, she is the brand ambassador for BBVA Compass. Kealia’s philanthropic spirit and athletic achievements make her an amazing role model for young female athletes.

Kealia Ohai is unmarried but, she is in a relationship J. J. Watt, an American football defensive player. Moreover, he is her brother-in-law, Brian Cushing’s teammate. The couple met through Kealia’s sister Mega. In 2017, Kealia confirmed on the 2 Up Front podcasts about their relationship.

The couple J.J. Watt and Kealia Ohai shared an adorable candid photo of them laughing in his living room on Instagram in 2017. Moreover, in July 2017, the couple posted their adorable photos of their summer activities.

On her 25th birthday, the NFL star took her on a romantic trip to Mexico. She even shared a bikini photo and holding an adorable puppy on the Instagram account.

Kealia Ohai is one of the rising players in women’s soccer. Moreover, she is a spokesperson for the Puma brand athletic wear. As a brand ambassador, Ohai will represent BBVA Compass in advertisements, community involvement activities and speaking engagements. This makes people suspect that her net worth is high.

Several famous brands and endorsements offer her the opportunity. Houston Dash’s salary cap per team is $265,000, which means a top salary of about $37,000 a year and as little as about $6,0. Allocating information from several sources as of 2018, her net worth is estimated to be around $8 Million.