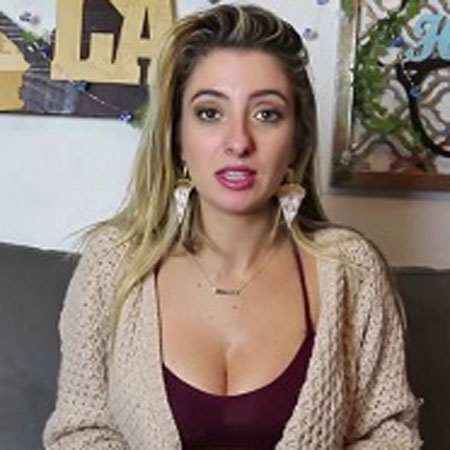 Lauren Francesca is an American actress, dancer, musician, and a comedian. She is also an Instagram model and Youtuber, best known for her outstanding roles in the movies like Louie (2010), #Lucky Number(2015) etc.

On her Youtube channel, Francesca uploads videos like Barely Political, CollegeHumor, Epic Meal Time etc. Francesca is not married yet and is currently single.

A renowned and multi-skilled Lauren Francesca must be earning a decent amount of money from her acting career. Till date, she starred in several movies. Likewise, Francesca also adds money from her youtube channel and from the modeling career.

She advertises new fashion materials through her Instagram account. Francesca has also published different songs on youtube as well as two singles on the iTunes store. As of 2017, her estimated net worth is $1 million.

25 years old Lauren Francesca is active on social sites like Instagram, Twitter, and Youtube. She has lots of followers and subscribers on her social sites. Francesca is often spotted enjoying and partying with her male friends.

Likewise, if we watch her youtube videos and Instagram posts then we can definitely see her working with different guys. Although she has worked with many guys, Francesca did not mention anything about her love life.

Furthermore, there are no any rumors of her love affairs too. However, regarding her sexuality, she is straight.

Lauren Francesca was born on May 2, 1992, in New York City, New York, United States. She is the daughter of Fred Sirett (a Broadway actor, dancer, and choreographer) and Jo Ann Cifala. Her mother is also Broadway actor. Her parents have appeared together on the shows like Very Good Eddie and Whoopie.

I gave my mom a necklace from @vintagestampjewelstoo my favorite #jewelry company! Happy #mothersday to all the #moms comment below your favorite holiday! #christmas lol

At the age of eleven, Francesca started her education at the Joffrey Ballet School. Later she attended the Professional Performing Arts School for her higher studies. Furthermore, Francesca briefly attended the Fordham University where she received a scholarship to study pre-med. But Francesca completed her graduation from the New York Institute of Technology.

Since her childhood, Lauren Francesca developed a passion towards acting, dancing, and singing. So at the age of ten, she appeared in a solo at Washington Monument‘s  “America Sings.” Well, in between 2008 and 2009, Francesca released several commercials including AT & T, MTV, Comedy Central, and Spike TV.

Likewise, she also appeared on music videos along with the musicians like Los Campesinos!, Wisin & Yandel, Method Man & Redman, and Don Omar. Later in 2008, Francesca started working for the Barely Productions.

Till the date, she has appeared in different Barely Political videos and also has portrayed the role as Heidi Montag, JWoww, Poison Ivy, Nayer etc.

In February 2011, Francesca launched her own youtube channel IWantMyLauren with Jeff Gurian. Moreover, at the same time, she also started her own vlog entitled SecretLifeofLauren. Francesca often works on her channel along with Walter Masterson.

Besides this, Lauren Francesca also appeared in the Zenescope Entertainment‘s YouTube Web Series Comic Company as Alice as well as in the Lenox Avenue Web Series: The Series Chapter IV. However, in 2009, Francesca started her first acting career through the movie, The Gate of Fallen Angels.

I made a new video!!! Watch it now on @YouTube 😀 https://t.co/6iVLbkkq5n pic.twitter.com/GRu0Tbnf2l

Likewise, she even appeared in other movies like Louie (2010), #Lucky Number(2015), and CollegeHumor Originals (2006). Besides this, Francesca also worked in many music videos as well as released different singles.

These days, Lauren Francesca is releasing new songs, music videos as well as comedy videos on her Youtube channel. Furthermore, she also advertises the new fashion products via her Instagram.

What to do during a #blackout #sketch http://www.surefire.com/firepak.html sponsored by @surefire_lifestyle #firepak #surefire #surefirelofestyle full video in my bio! Feat. @bodybygia and @wrongtonylong they have the most awesome light for your phone!