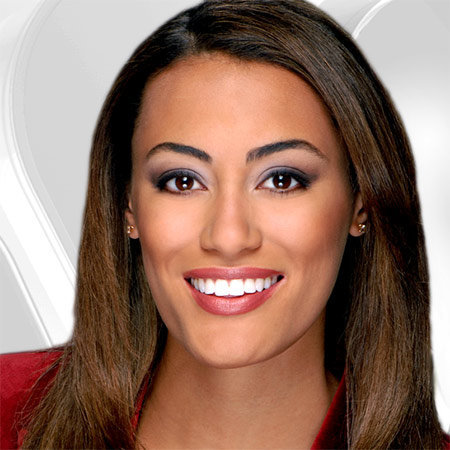 Lauren is happily married woman and mother of one baby boy. She tied the knot with Patrick Donovan in 2009.

Lauren Jiggetts was born to Dan Jiggetts and Karen N. Jiggetts in Chicago. Lauren’s father was a host and an analyst on Comcast SportsNet Chicago. He was also an offensive tackle for the Chicago Bears from 1976 to 1982.

As a child, she spent her childhood in Chicago. Lauren attended Stevenson High School in Lincolnshire where she interned in the newsrooms of WFLD-TV (Fox Chicago) and Chicagoland Television (CLTV). Later, she completed her graduation from Harvard University.

The best surprise. My dad is simply the best. https://t.co/WQkbJ6W4j6

Jiggetts was chosen by Harvard University’s Institute of Politics to compete in the Director’s Internship Program. She served in the public affairs office at MTV Studios in New York City, where she concentrated on their anti-discrimination campaign.

Lauren Jiggetts joined Channel One News in 2003 working as an anchor and reporter and after working there around one year she left the job and went to join WLVI TV Sunbeam Television. She worked there for around 2 years.

In January 2007, she joined NBC 5 as the weekend evening news anchor and reported on the weekdays. She joined NBC5 Chicago as a general assignment reporter and covered the 2012 Summer Olympic Games in London. She also co-hosted NBC’s coverage of the Bank of America Chicago Marathon in 2015 & 2016.

Lauren Jiggetts joined WGN Morning News as co-anchor of the 4 am and 5 am newscasts in July of 2017. Lauren earned a national and regional Emmy in 2011 for her present to the station’s coverage of the Burr Oak Cemetery Scandal. She has also earned multiple local Emmys including one for her contribution to NBC 5’s coverage of the Chicago Marathon.

In 2015, she got the Irv Kupcinet Media Award at the 41st Annual Ed Kelly Foundation Gala. In 2007, Lauren was the winner of the Community Partnership Award from Spertus College.

Lauren Jiggetts is a married woman. She and her husband Patrick Donovan has been married for a long time. They tied to knot after dating for several years in August 2009.

Her husband Patrick is a research analyst at Pyramis Global Advisors, a unit of Fidelity Investments, in Smithfield, R.I. where he makes stock sanctions on companies in the energy sector. The couple first met at Harvard University, from which they graduated.

The couple recently welcomed their first baby in the world. Lauren gave birth to the son named Brendan and she was very excited and happy while sharing the news along with her husband.

Have a look at her newborn baby and relatives photo: Twitter

In her free time, Lauren enjoys reading, running and spending time with her family. Besides that, Lauren is also quite active on social media. She has more than 9600 followers on Twitter and around 9000 followers on Facebook.

Lauren has bagged several awards and she is definitely earning a decent amount of money as a salary. But her blockbuster shows are the evidence that she has a huge amount of money. Lauren has contributed a lot to the news channel as a broadcaster and anchor.

Allocating information from several sources as of 2018 it is found out that Lauren Jiggetts current estimated net worth is around $1 million.