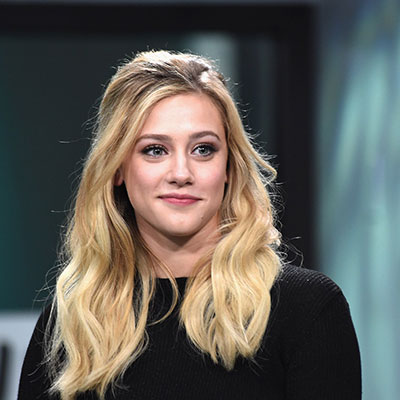 Reinhart seems to be in a relationship with her co-star Cole Sprouse. The rumors of them dating have been going around since 2016. However, they have not openly confirmed their relationship yet.

Lili Reinhart was born on 13th September 1996, in Cleveland, Ohio. She has two sisters named Tess Reinhart and Chloe Reinhart. Her mother’s name is Amy Reinhart. Regarding her nationality, she is a white American with beautiful blonde hair.

As for her education, she attended Bay High School. She then got enrolled in an online program of Allied National High School to complete her high school education. However, after graduating from high school she has not pursued a college education since she is busy with her acting career.

Furthermore, acting was always a point of interest for Reinhart. She fell in love with dancing and took dance classes for over 10 years. She participated in various musicals in the community theatre. The actress signed with an agency in Cleveland at the age of 11. She then moved to Los Angeles at the age of 18 to pursue acting.

Reinhart began her professional acting career since 2008. Her first on-screen appearance was through a short film named For Today where she played the role of Rachel. After that, she has appeared in movies like The Most Girl Part of You, Lilith, Not Waving But Drowning, Kings of Summer, The Good Neighbour and many more.

Furthermore, Reinhart made her debut on television through a series named “Law & Order: Special Victims Unit”. She appeared on the TV show Surviving Jack for 6 episodes. Then, she bagged the role of sweet studious, wholesome Betty Cooper for the series Riverdale on 9th February 2016.

This has proved to be her breakthrough role. She stars alongside Cole Sprouse, Camila Mendes, KJ Apa, in the show which is a spin-off of the popular Archie comics.

Furthermore, the talented actress has appeared in talk shows like Late Night with Seth Meyers, The Tonight Show Starring Jimmy Fallon and many more. Reinhart is currently set to appear in upcoming movie Galveston.

Reinhart has been rumored to be dating her co-star Cole Sprouse who plays Jughead. The two were seen holding hands and kissing in public. The two even went on a vacation to Hawaii. They often post pictures of each other on their respective Instagram page.

The couple has a great chemistry together on screen so it would not be a surprise if they are dating in real life. However, they have not confirmed the rumors and prefer to keep their dating life private. Nevertheless, this has not stopped fans shipping the two together.

Apart from that, Reinhart has openly talked about her struggles with depression that she has faced from a young age. She revealed that Riverdale came into her life when she was dealing with the worst depression of her life. She has addressed the importance of mental health many times.

And when I’m feeling depressed or sad, I remind myself how far I’ve come. And how I didn’t let my depression consume me…

Reinhart is a good role model and has used her popularity to highlight mental health. It is an issue close to her heart and she has helped to continue the conversation around mental health.

Reinhart earns a good sum of money in her career. She earns $300,000 for playing Betty Cooper in Riverdale. Apart from that, she has done various projects which have contributed to her net worth. She has a Yorkshire terrier mixed bison worth $300-$10k and a Golden Retriever worth $500-$3k.

Allocating information from several sources as of 2018 it is found out that her current estimated net worth is around $2 million. Reinhart lives a good lifestyle. She is still active in her career. We can definitely expect to see more of the beautiful actress in the industry. Hence, her net worth is expected to rise in coming days.