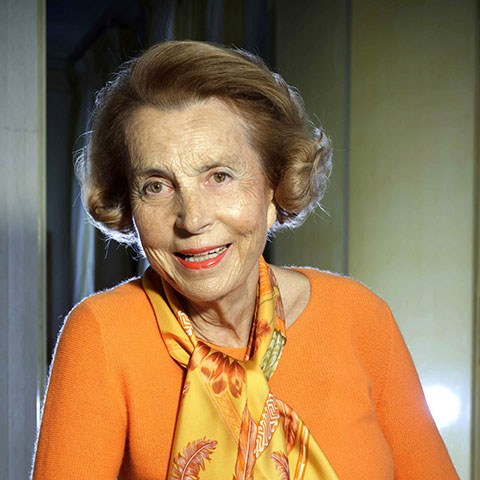 Liliane Henriette Charlotte Schueller (Liliane Bettencourt) is one of the successful and famous French heiress, socialite, and business person of the world. Coming to this far, she represent herself as the principal shareholders of L’Oreal and is also serve herself as one of the dominant women and richest women of the world. The successful entrepreneurs and powerful example of the women empowerment, she is rank as the 10th richest person in the world with the total net worth of $40.2 billion as of November 2016. Born in the year 1922, October 21 in Paris, France, she represents herself as the French icon.

Bettencourt was born and raised in Paris, France and represent herself as the only child of Louise Madeleine Berthe and Eugene Schueller, who is the founder of the L’Oreal, which needs no introduction and is one of the best cosmetic products of the world. Facing the tragic event of the death of her mother when she was only five years old, she involves herself in Father companies and creating different products and taking a business to a new level.The turning point came into her life when the whole world faces the deathly World War II. During that time, she was actively supported by her father and even collaborated with Nazis to sustain their lives and pursue a career in the similar line in late future.

After the death of her father in the year 1957, she became the principal shareholder of the L’Oreal and hold a lot of shares in her name, despites of the company going to the public. In the year 1974, the fear of getting the company nationalized due to French political elections, she had to take the crucial decision of exchanging almost half of her stock for three percent stake in Nestle S.A.At present, she holds the 30.5 percent share of the L’Oreal out of which 12.56 percent of her share is for the trust and her daughter. On the contrary, she holds the prestigious 29.78 % share from Nestle whereas other 37.76% share are publicly held and kept as treasury stock of the company.

Apart from being a principal shareholder of her father’s company, she represents herself as an active philanthropist. She is the founding member of Bettencourt Schueller Foundation along with her husband and daughter. The foundation has been actively in the field developing medical, cultural and humanitarian projects all around the world. Liliane serves herself as master of both personal and professional life. The beautiful Liliane tied her wedding knot with her husband Andre Bettencourt in the year 1950. Andre was one of the active French politicians back in the days and has successfully served the cabinet minister in French governments from the year 1960 to 1970. The couple shares one beautiful daughter named Francoise with each other who was born in the year 1953. Francoise is the next principal shareholder of Liliane property whereas she has active involvement in the management of L’Oreal.