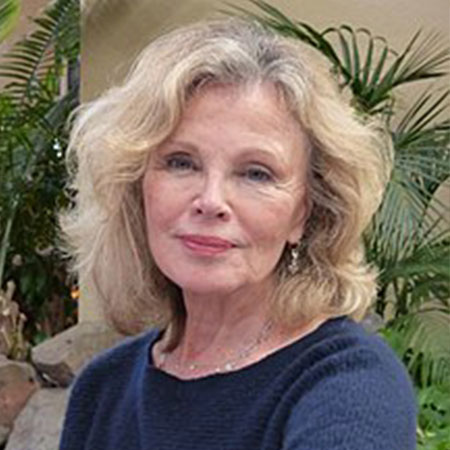 A Norwegian-born American actress, Marta Kristen is well-known for portraying as Judy Robinson in the television series Lost in Space. Her other notable role includes Alfred Hitchcock Presents and My Three Sons.

Marta Kristen married twice till date. Firstly, she married Terry Treadwell, in 1964 and welcomed a daughter named Lora Alison Treadwell. Later, she tied the knot with Kevin Kane. The couple lived together in Santa Monica, California until the death of her husband.

Birgit Annalisa Rusanen aka Marta was born on 26th February 1945 in Oslo, Norway. She was born to a Finnish mother and a German father who was killed during World War II. She was left in an orphanage when she was just two weeks old.

After four years in 1948, she was adopted by American parents Harold Oliver Soderquist and Bertha from Detroit, Michigan. They named her in honor of Marta Bentzen, Oslo social worker who assisted Harold with the voluminous red tape attached to an international adoption.

Marta flew to Los Angeles, California along with her adopted parents in 1959. She quickly adopted the language, customs, and tradition of the United States. She also enrolls at the Farmington Elementary School and started her education.

During her School, Kristen alone with a group of her classmate portrayed in small comedy show which led her to attend Will-O-Way Theatre in Birmingham, Michigan on the recommendation of her father colleague. She was accepted by the theatre and also got chance to cast in Taming of the Shrew and Little Women when she was just fourteen years old.

Afterward, Marta enrolls at the Detroit Civic Theatre where she completed a course in drama. Then, her parents took her to California and enrolled her at the Santa Monica High School in 1959, where she completed her high school graduation at the age of 16.

Kristen got chance to step in the entertainment industry after she was discovered by James B. Harris, Producer/Director/Writer, while she was eating a hamburger with her boyfriend at a drive-in restaurant. She first made her appearance in television series “Bang! You’re Dead”, in 1961.

After appearing in several series, Marta got the opportunity to feature in the movie Beach Blanket Bingo portraying the role of Lorelei in 1965. Her outstanding performance won the heart of millions of people and the movie was also successfully hit. With rising of fame, she also featured in Lost in Space and also made several guest appearances on TV series.

Furthermore, Marta also made several television commercials and appeared in more than 40. Her other notable TV series includes Battle beyond the Stars, Lost in Space Forever, Never Fear, Smith Is Here, and much more.

Marta Kristen married twice till date. Firstly, she was married to a psychologist, Terry Treadwell, in 1964. The couple welcomed a daughter named Lora Alison Treadwell. After nine years of relationship, the couple ended their marital relationship in divorce in 1973.

While Marta was pregnant with her first daughter, Lora, she was on a trip to Finland where she found out her birth mother named as Helmi Rusanen and also found out her older half-sister.

In 1974, Marta fell in love with Kevin Kane and no longer after, the couple tied the knot on 18th November 1978. The couple lived together in Santa Monica, California with their two rescued dogs until the death of her husband. Marta announced the death of her second husband, Kevin, through Facebook in May 2016.

Marta earns a good sum of money from her career. She featured in several movies and TV series through which she receives a decent amount of money as salary. Till date, Marta portrayed in numerous moves and television series where several of them were successfully hit.

Moreover, Kristen had also made several television commercials and also appeared as a guest on different television shows through which she receives a decent amount of money. Allocating information from several sources as of 2018 it is found out that Marta Kristen’s current estimated net worth is around $2 million.