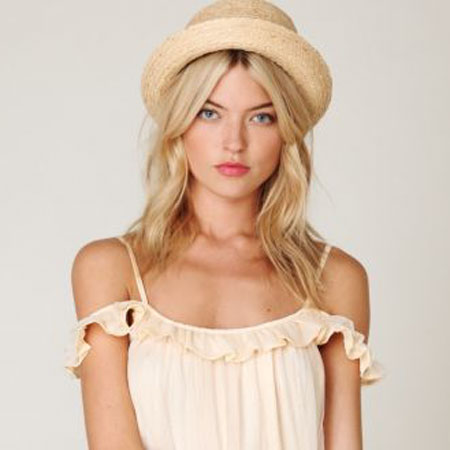 Martha Hunt is unmarried and is in a relationship with her boyfriend, Jason McDonald, a photographer. They met for the first time in 2015 during a shooting campaign for Free People.

Martha Seifert Hunt was born on 27th April 1989, in Wilson, North Carolina, U.S. She completed her high school education at the Ibstock Place School in Roehampton. Hunt used to go the relaxation classes since Martha Hunt had a stammer from the age of 8. She was interested in modeling and acting since her childhood.

After hearing about a model search through her local radio station, Martha Hunt decided to enter the competition. Coming from a small town in North Carolina, modeling seemed more like a fantasy than a realistic career choice.

Martha Hunt was spotted by a photographer in Charlotte, North Carolina, who offered her to agencies in New York. While in high school, she signed with IMG Models. In 2007, she did the runaway walk for Issey Miyake.

At the same year, Martha Hunt appeared in a short UK drama film called Cregan. Martha Hunt got her role as a woman with shopping, and it was 11 minutes long. Moreover, in 2009, Martha Hunt was on the cover of Vogue China, Revue des Modes, V, Glamour Germany, and Muse. Additionally, she walked for Tracy Reese, J. Mendel, Wayne, and Rebecca Taylor.

In 2010 and 2011, Martha Hunt was featured in Velour, Marie Claire Italia, Vogue Russia, Harper’s Bazaar, and Allure. Likewise, she also appeared in the advertisements for BCBG Max Azria, Y-3, Hugo Boss, and Via Spiga.

Additionally, she contracted with IMG Models in 2012, during which she also posed for Pennyblack, Jason Wu, and Victoria’s Secret. She was also featured on the cover of Elle and was selected for LOVEmagazine’s 2012 video advent calendar.

What an honor to walk the first #VSfashionshow in Paris!! Can’t wait to watch it Monday! Big thanks to @10magazine @johndavidpfeiffer @ed_razek @monica.mitro for making so many dreams come true. There are no words to describe the energy backstage, and all the love and support the girls have for one another. ????????????

Till date, she has walked on the ramp for more than 180 different fashion shows like Dolce & Gabbana, Louis Vuitton, Prada, Versace, etc. She has been on the cover of Harper’s Bazaar and Vogue China. Moreover, she also became a spokesmodel for Free People.

Apart from her successful career in the fashion industry, she has been featured in music videos too. She appeared in the music video “Bad Blood” of Taylor Swift and “Paris” of The Chain Smokers.

Martha Hunt is unmarried till date, but she is in a relationship with her boyfriend, Jason McDonald, a photographer. They met for the first time in 2015 during a shooting campaign for Free People. As of now, their relationship is going very well, and there are no signs of separation.

Besides that, at the age of 14, Martha Hunt noticed that her body felt very asymmetrical. She shared this with her parents, and they thought she was a typical insecure teen. Moreover, it was even more noticeable when she was 15.

Hunt’s waist came in much further on one side, and her right shoulder blade protruded far more than the left. Martha persuaded her parents to take her to a doctor and diagnosed with a mild case of idiopathic scoliosis, and her spine had indeed started curving into an “S” curve.

Martha Hunt earns a good sum of money in her career. Being a model she has done modeling for several brands through which she obtains a huge sum of money. Moreover, she also receives a decent amount of money from different fashions lines and brands as an endorsement.

Allocating information from several sources as of 2018 it is found out that Martha Hunt current estimated net worth is around $3.5 million, which includes her car, luxury house. Through modeling, Martha Hunt is earning a handsome salary which involves many contracts with modeling agencies.