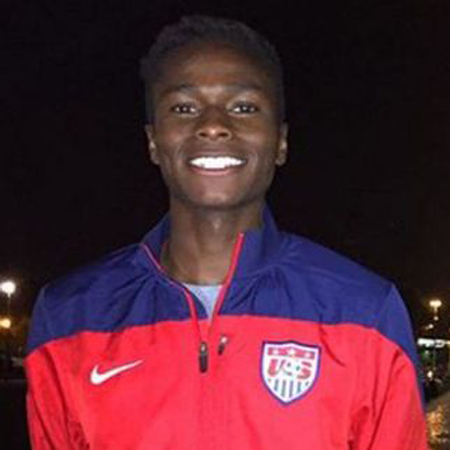 Matthew Olosunde is a young and rising Nigerian-American soccer player, who plays for one of the well-known Premier League team, Manchester United U23. He is best known for defending in the right-back position (midfield), since 2014.

The 19-years-old, Matthew Olosunde was born on 7th March 1998 and grew up in the city of Trenton, New Jersey, United State. By the way, next month, in March, he is going to celebrate his 20th birthday with his club, Manchester United which is going to be one of his memorable days for him.

As per the sources, Olosinde was offered online courses at the University of Oxford by the club, Manchester United which means he is focusing on his career as well as in education too.

This young and talented soccer player, Matthew began his career at the very early age of 16. His journey in the soccer began with the New York Red Bulls Academy where he was a right winger before he pursued his higher education at the Duke University.

There he represented his club’s under-16 and under-18 academy teams with pretty impressive defending from the right-back position. At that period, Nicky Butt was the head of the academy and Olosunde had a good impact since his beginning session.

On 16th August 2014, Matthew made his debut match for the New York Red Bulls where he had 71 minutes on the pitch and reserves a 1-0 win against Wilmington Hammerheads, in the United Soccer League.

Then the following year, he left the Red Bulls to further his education at the Duke University. There he was named one of the Duke’s six new recruits of the last season. John Kerr coached him and found him one of the comfortable players of his team; as he was incredible defensive with recovery speed.

During 2015, Matthew was the member of the United States U17; as he has already established himself as one of the prominent defenders. There he played over 22 matches and represented the United States at the 2015 FIFA U-17 World Cup, held in Chile. His first international match was against Nigeria.

Standing 6’1” tall, Matthew Olosunde officially joined the Premier League club, Manchester United on 11th March 2016 although the news regarding his joining in the Premier League was out in January.  It was one of his biggest achievement of his life to be recruited for one of the world top most soccer team.

The club also offered him online courses at the University of Oxford and received international clearance for the young American and finally, joined the team along with the new manager of the club, nonother than Jose Moreno.

First of all, he joined Under-18 set-up and then looking at his talent, he was promoted to the Under-23 team ahead of the 2016-17 season and appeared in the Premier League 2 campaign too.

In the journey of the United, Mathew has a memorable moment after he scored a solo goal against Real Salt Lake in the Academy’s Dallas Cup, in April 2017.

Further, he also got an opportunity to travel with the first team squad in Premier League games with two other biggest teams in the league against Arsenal and Tottenham Hotspur F.C. with renowned players Juan Mata, Zlatan Ibrahimovic and so on.

Definitely, he will create a great history in his near future; after all, he is a young and stronger defender for the team, United.

This young and talented player, Matthew is currently focusing on his career and giving his best in the Premier League. Being totally focused in his career, he is not involved in love affairs. Also, he loves to keep his personal life behind the curtains so that, there is no such news regarding his personal life and family background as well.

After signing for the Premier League team’s Manchester United, Matthew Olosunde has set a bright future in the related field. As of 2018, his net worth is yet not published in social media but definitely, he is going to make a good sum of money from the club.