A rookie award winning, Maverick Viñales is a Grand Prix motorcycle racer from Spain. He is widely known for winning the 2013 Moto3 World Championship.

Maverick Viñales Ruiz was born on 12 January 1995 in Figueres, Spain. He got his unique name from his father who was a huge Top Gun fan and decided to name his son after the Tom Cruise character in the famous 80s movie.

The name turned out to be appropriate as the young Maverick got into mini moto racing at the age of 3. He began competing on a regular basis.Vinales progressed through various local competitions and by 2007 Vinales won the Catalonian 125cc Championship and 2008.

In 2009 Vinales moved up to the CEV Buckler 125GP series, he was fast from the beginning and went on to win the series in 2010. His cousin Isaac has also raced in Moto3.

Maverick Viñales began his World Championship debut in 2011 in the 125cc Class in his native Spain. In which he subsequently came third and was named Rookie of the Year.

In 2012 he continued with the Blusens Avintia team in Moto3 aboard an FTR-Honda, where he fought heavily with Sandro Cortese for the title.He moved to Team Calvo for 2013 alongside Ana Carrasco. He won his first two races with Team Calvo back-to-back at the Spanish and French Grands Prix.

In 2014 Vinales went up to Moto2 and entered the Paginas Amarillas HP 40 team where he completed the season in the fourth place in the Championship standings.

Viñales became a very good MotoGP season with the factory Suzuki team which was the comeback year for the Japanese manufacturer. Scoring in 16 out of 18 races on a struggling bike makes Viñales a consistent and notable rider. He finished the season at the 12th place winning the rookie of the year award.

The 2016 MotoGP season determined to be a defining season for Vinales as he secured his first MotoGP podium in France and then went on to record his first MotoGP succeed at the British Grand Prix at Silverstone.

Vinales then declared that he had endorsed a contract for the 2017 and 2018 seasons with the Factory Yamaha team that would see him become Valentino Rossi’s team-mate.

Maverick Vinales has opted for classic looking helmet designs so far in blue and red, but in recent years he has risen making a few design nods to the film Top Gun. The Maverick Vinales helmets accessible on the market at the moment are in the Arai RX-7 or the Arai Corsair X range.

The helmet model has several names depending on where you are in the world, but it’s all the related thing. This is a premium Arai helmet and as a result, it is fitting for the racetrack as well as the road.

His cap/hat contains number 25, Yamaha Factory Racing logo, M1, and 25MAVERICK, which is made of 50% cotton and 50% polyester.

Being a rising star of a motorcycle racer, his personal life is the matter for his fans. He has won million heart through his racing and dashing personality.

So, let’s start with his former girlfriend, Kiara Fontanesi.The couple began to date each other in 2015 but after dating around two years the couple ended their relationship in January 2017. 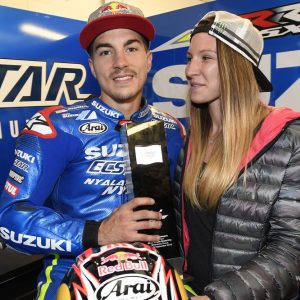 After broke up with Kiara, he found his new flame named Cristina Llovera. She is an Olympic sprinter, who competed in the Women’s 100 meters at the 2012 Summer Olympics in London.  Their relationship is going very well and the couple making their appearances in the public places also.