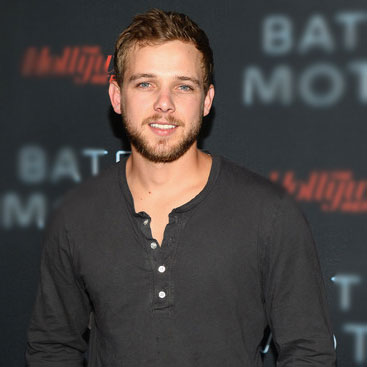 Max Thieriot is an American actor who is mainly known for his work in the comedy film, the Pacifier as Seth. Likewise, he came to limelight after appearing in, A&E series, Bates Motel.

The handsome and talented actor, Max married to his long-term dated girlfriend, Lexi Murphy. The husband and wife welcomed their son in 2015 and they named as Beaux.

Maximillion Drake “Max” Thieriot was born on October 14, 1988, in Los Altos Hills, California. He is a son of George Cameron Thieriot, father, and Bridgit Synder, mother. Likewise, he rose up along with his two siblings, Aidan Cameron, brother and Frankie Thieriot Stutes, sister.

Thieriot first attended the Sonoma Country Day School and later joined El Molino High School for his further studies. After his graduation, he then signed with the talent manager Don Gibble for his improvisation class. In that respect, he started working as a model for the worldwide clothing and accessories retailer, GAP.

While working as a model, Thieriot also made an appearance in the short movies. In 2004, he made an onscreen debut as a role of Gus in the film called Catch the Kid. A year later, he appeared in the movie called The Pacifier as Seth Plummer along with renowned popular actor, Vin Diesel. For that role, he became the nominee of two awards, The Stinkers Bad Movie Award and Young Artist Award.

In 2009, Max won the Young Artist Award for best performance in a feature film Kit Kittredge: An American Girl. Likewise, he made a television series debut, in 2012 called Dark Horse as Carter Henderson. As of now, he has appeared in numbers of television series and films. Some of them are Texas Rising, Bates Motel, and Jumper, Stay Cool, Yellow, Disconnect etc respectively.

Currently, the diligent actor is working on the series, SEAL Team as a role of Clay Spenser. Besides acting, Thieriot is also a vintner. He owns vineyards in his hometown of Occidental.

Aged 29 handsome actor is married to his long-term dated girlfriend, Lexi Murphy. The couple tied the knot on June 1, 2013, in Lake Tahoe, California. Max proposed to Lexi during their trip to the Caribbean.

Instagram: The husband and wife, Max and Lexi with their children.

Happy Anniversary to my queen ! ?????? “I feel like I could do anything in the world When I look at you, girl” #4years #wifey #love #loveher #weddinganniversary

The husband and wife are blessed with a son called, Beaux Thieriot. Till the date, the couple has maintained their relationship very strong. They have not engaged in any extra affairs and neither there has been any serious conflict between the couple which would lead to divorce.

American actor, Thieriot makes a good amount of money from his acting professions. As of now, he has appeared in multiple awards and television series. Similarly, he is also the owner of vineyards. From there, he has accumulated a decent money. As of 2017, his net worth is estimated at around $2 million.