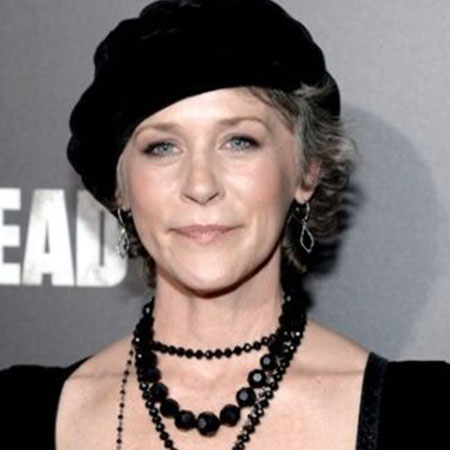 Melissa McBride is an American actress. She is mainly known for playing on The Walking Dead as Carol Pelletier. She is also a former casting director. In 1990 she began her acting movie and television career.

Melissa was born on May 23 1965 in Lexington, Kentucky, United States. Her full name is Melissa Suzanne McBride. Her mother studied at Pasadena Playhouse and her father owns a business. She have three siblings.

In 1991 she appeared in several television commercials beginning her career. She worked as a spokeswoman for Ford. In 1993 she made her television series debut playing in Matlock. She also guest starred in television drama series which includes Walker, Dawson’s Creek, Profiler, In the Heat of the Night, Texas Ranger and American Gothic. In 1998 she played in the season one episode Road Trip as Nina. She again returned in the finale series in 2003 playing a different character. In 1990 she appeared in television movie her Deadly Rival in a supporting role opposite Annie Potts. She also appeared in Any Place But Home, Close to Danger with Rob Estes and Pirates of Silicon Valley. She then appeared on the miniseries A Season in Purgatory. It was based on the novel by Dominick Dunne on 1993 with the same name. From 2000 until 2010 she worked as a commercial and film casting director in Atlanta, Georgia. During the same time she starred in several short films. She then was casted as the woman with the kids at home in the horror film The Mist alongside Thomas Jane, Marcia Gay Harden and Laurie Holden. The film was directed by Frank Darabont in 2007. She then appeared in television movie Living Proof in the following year.

She was casted in the television series The Walking Dead as Carol Pelletier. The following role was her biggest role till date. Her role is of a middle aged widow and caring mother of the character Sophia who is fighting to survive with flesh eating zombies. As she thought it was a temporary she did not auditioned for role. In the first season she played as a cast member. She then played a character of a weak and dependent woman into a strong character as the series progresses. Her character received favorable reviews from critics in the third, fourth and fifth seasons. She was praised for her performance for her character in the fourth season. Although she was praised for her role she was unable to win award and also did not receive nomination for Primetime Emmy Award in 2014. She won a nomination for Primetime Emmy Award for her outstanding performance in a Drama Series. She also won Choice Television Award in a Drama Series for her performance in season 4. She then was nominated for Fangoria Chainsaw Award in a Television series.

She moved to Atlanta, Georgia in the mid-1980s. She currently resides there. She has a huge interest in psychology.