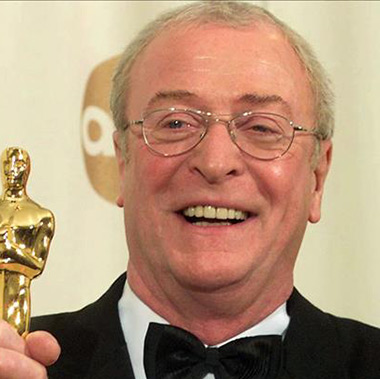 ” I think what is British about me is my feelings and awareness of others and their situations. English people are always known to be well mannered and cold but we are not cold – we don’t interfere in your situation. If we are heartbroken, we don’t scream in your face with tears – we go home and cry on our own.”

Born in Maurice Joseph,London on March 14, 1933, Michael Caine is an English actor and also author.

Michael Caine is the son of Ellen Frances Marie who was a cook and also a fish porter while Maurice Joseph Micklewhite who was Charwoman.His father belongs to Catholic religion.He has got two siblings.David William Burchell is his maternal half-brother and Stanley Micklewhite is his full brother.

He started working at the age of 16.He was keen in business from the early age.He the worked as the clerk and also messenger in Victoria Street for a film company.He also served British Army’s Royal Fusiliers and then on active service during Korean War and was only seventeen.

Michael’s acting career began at the age of 20. He struggled many years to be the actor and got the lead role in A Hill in Korea in 1956. .From 1970 to 1980, his roles were good as well as bad.He played the movies like The Swarm,The Island, The Revenge, A Bridge too Far, Dressed to Kill, etc.His strong appearance in Educating Rita helped him for his First Academy Award.

The film Alfie helped him to introduce himself towards American audiences and also was nominated for his first award.He played a role with the legendary actor Laurence Oliver in the movie Sleuth.He also played an adventure drama movie starring with Sean Connery in The Man, Who Would Be King.He even played a comedy movie California Suite.

He gave his best performance in the movie The Cider House Rules which was based on John Irving novel.He played as a doctor who runs an orphanage.In 2002, he played as Thomas Fowler in The Quiet America.His work in this movie was remarkable which helped him win an award for Best Supporting Actor.He also played in blockbuster movies like The Dark Knight Rises, Inception, and Interstellar(2014).

He appeared in about 115 films till the date.He is also one of the most recognizable actors of the US. He started being known from the movie Zulu.In the movie The Ipcress File, he played a role of a spy.This movie was based on the book by Len Deighton.

Michael got married to Patricia Haines, who was an actress.They both have the beautiful daughter named Dominique.Later they got separated with each other.Then he started dating Bianca Jagger in 1968.He later married to Shakira Baksh.She was a model and actress and belongs to the Muslim religion.They both met each other at her appearance in Maxwell House.They have their daughter Natasha Haleema.

He won Oscar award in 1987 for movie Hannah and Her Sister and 2000 for the movie The Cider House Rules for the category of Best Actor in a Supporting Role.He was nominated for the Best Performance in a Motion Drama for the movie The Quiet American.He won Golden Globe award for Little Voice.In 2000, he won Academy Fellowship award.He also won Golden Kinnaree Award in 2003.In 2009, he won Variety Award.He also won Golden Satellite Award for the category of Best Performance in Motion Picture Drama.He was nominated for WAFCA Award in 2010 for movie Inception in category Best Acting Ensemble.