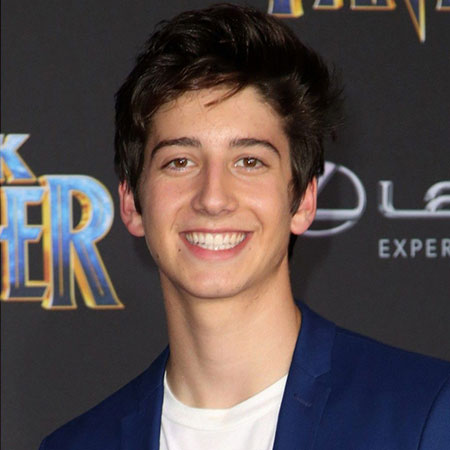 Milo Manheim is an American actor recognized for his starring role as Zed in the 2018 Disney Channel Original Movie, Zombies. He is also known as a participant of a dancing reality show “Dancing with the Stars” appearing in its 27th season and finished in second place of with Witney Carson as his dance partner.

Along with a name and fame as an actor, Milo relishes with his estimated net worth of $500,000. He is romantically involved in a relationship with Holiday Kriege. Scroll to know about his income, girlfriend, and career.

Milo Manheim Net Worth and Income

Milo Manheim has recently landed on an American musical and dance Disney Channel Original Movie, Zombies which was released on February 16, 2018, and has a very good IMDB rating of 6.4 out 10.

As a lead actor of the movie, Milo so far has been paid noticeably a pleasing amount for his performances. Milo reportedly receives a good amount of salary around $15,000 for his appearance in the TV series.

Besides earning from movie and TV series, Manheim also gathers some fortune through his endorsement deals with various applications such as Spotify and DisneyNow App.

Despite being a noticeable actor, Manheim is also involved in community service and has worked with various companies like Foster Care, Poker for Puppies and Venice Family Clinic which give health care to low-income people. Milo Manheim is an enthusiastic struggling actor who is still working hard to grab the audience attention.

As the exact net worth and income of versatile actor hasn’t been revealed but through some of the sources, we evaluate his net worth to be around $500,000.

Milo Manheim belongs to an intellectual family where his grandfather, Jerome Manheim was a mathematician and his grandmother, Sylvia, a teacher, and health advocate. Further, his uncle is a lawyer and professor, as well as other members of the family also holds profession of doctor, environmentalist, and educators.

Glancing on his relationship status, Manheim is neither single nor married. The good-looking actor is bonded with his girlfriend, Holiday Mia Kriegel. She is also a talented singer and actress as well as a championed Jockey.

Manheim was a participant on the contest, Dancing with stars collaborating with Whitney Carson as her dancing partner. There was an active rumor about them of dating in real life but, the news couldn’t be verified.

Moreover, Manheim is also close to a lady named Ana Kahan to whom he regards as a best friend. They were also featured together in one of his YouTube videos where both were seen singing.

Milo Manheim was born on March 6, 2001, in Venice, Los Angeles to father, Jeffrey Brezovar, a famous model, and mother, Camryn Manheim who is a famous actress known for her part in the film “Ghost Whisperer”. She has won Emmy Awards and Golden Globe Awards.

As a result from the national inquiry, Jeffrey is a friend of Camryn who donated his sperm in order to artificially inseminate.

Concerning Manheim’s nationality, he is American and belongs to White ethnicity. Further, his star sign is Pisces. As he is the only child in the family, he doesn’t have any siblings.

You May Also Like: Joseph Cross Biography, Personal Life

Talking on his academic, he attended a secular Jewish community school. There is no other information on his educational history either.

At the age of 6, Manheim began his acting career performing in a local stage after-school program in Culver City.

Since 2008, he starred with Liza Monjauze Productions in 20 different musicals. In 2009, he appeared in a three-line guest appearance alongside his mother on the CBS television series, Ghost Whisperer.

In 2017, Manheim won “Best Leading Actor” for his role in the musical “Generation Me” at the 2017 New York Musical Theatre Festival. He was later cast in a lead role in the Disney Channel television movie, Zombies, released on February 16, 2018.

Similar Personality on Dancing with the Stars Bruno Tonioli Biography

On September 11, 2018, Manheim was announced as one of the celebrities to compete on season 27 of Dancing with the Stars. While the end of the season on November 19, 2018, Manheim and Carson finished the competition placing 1st runner up, losing to radio personality Bobby Bones.