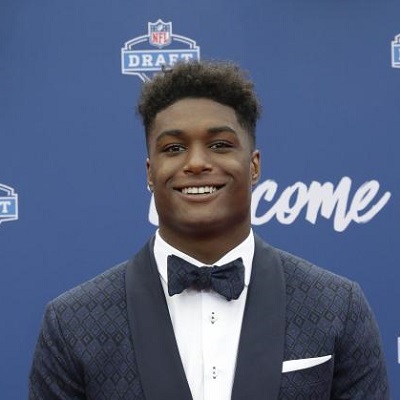 Myles Jack is an American football linebacker currently playing for Jacksonville Jaguars of the National Football League (NFL). During his college football days, he received honors on defense as well as on offense as a running back.

Myles Jack was born on 3rd September 1995, in Scottsdale, Arizona, United States. He was born to H. David Jack and La Sonjia Fisher Jack and grew up along with his sibling brother Jahlen Jack.

Jack played a running back in his starting days. However, later he played as a linebacker. Well, the Rivals.com listed him in the 16th position as a linebacker in the nation in 2013. He was offered to play for Florida State and Arizona State. Moreover, Stanford, Washington, and Utah also offered him but he chose to play for UCLA.

Myles Jack joined the college in 2013 and played football with the college team as a freshman. In the first season, he played the first 12 games as a linebacker and 1 game as a running back. Jack performed the best in the following season and was able to become the second-most ever freshman of UCLA to score good points. However, he didn’t play as a running back until the ninth game.

Two running back players of his team Bruins and Jordon James suffered an ankle injury. So he played as an offense for the team. However, in  Pac-12 Conference Jack played as both offensive and defensive.

Well, the Athlon Sports named him as an All-American as well as he was the finalist of Paul Hornung Award. However, in 2013, he received  Freshman All-American honors from The Sporting News.

In 2014, his team named him as a linebacker for the  All-Pac-12. But in the following year, he also played as a running back. On 22nd September 2015, Jack suffered a knee injury so he didn’t participate in any games of the following year’s season. Well, in 2016 Jacksonville selected him in their second round of 2016 NFL Draft.

Myles Jack is not married yet and is having children is out of concern. However, he is dating his girlfriend Jordan Spencer for a long time.

This couple is happily enjoying their love life. We can even see them posting photos together on their social media. Moreover, they often make their appearances together in the public. Besides this, there are no any records of his past relationships. Jack is from an American nationality and his ethnicity is black.

Professional footballer, Myes Jack earns a good sum of money in his career. He played in several matches and tournaments through which he receives a decent amount of money. However, his current salary reported being around $737,929.

Additionally, Myes also receives a good sum of money from several fashion lines and brands as an endorsement. Allocating information from several sources as of 2018 it is found out that his current estimated net worth is around $2 million.