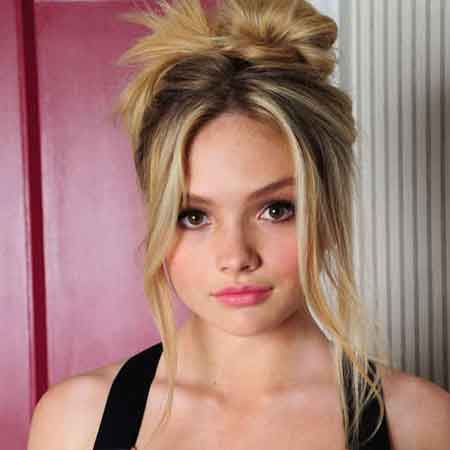 Natalie Alyn Lind is an American actress better known for her role as Dana Caldwell in the series The Goldbergs. To date, Lind is not married and is not dating anyone at the current moment.

However, Lind previously dated an American actor Aramis Knight. Currently, Lind plays the main role of Lauren Strucker in the series The Gifted.

Natalie Alyn Lind is an unmarried woman. Well, Lind was previously in a relationship with an American actor Aramis Knight. Lind began dating her ex-boyfriend Aramis in 2015. But their relationship lasted for just a short period of time and the couple separated after dating for a few months in 2016.

Moreover, Lind shared a few photos of a mysterious guy on her Instagram. It has grabbed the attention of her fans. But yet, Lind hasn’t openly talked about her relationship to the public. Her fans are eager to know who the mysterious guy is?

Hope she soon reveals everything about the guy and her relationships. Besides this, Lind hasn’t been in any other relationships and affairs. Currently, the young and talented actress, Lind might be focusing on her career.

Allocating information from several sources as of 2018, it is found out that Natalie Alyn Lind current estimated net worth is around $2 million. Lind earns a decent amount of money from her acting career. She is actively working in the acting field for long and has starred in numbers of movies, television series, and tv shows so far.

Natalie Alyn Lind was born on 21st June 1999, in Illinois, United States. Her father John Lind is a producer and mother Barbara Alyn Woods an actress. Lind grew up along with her sister Emily Alyn Lind and Alyvia Alyn Lind.

She belongs to American nationality, however, Lind hasn’t revealed any information about her educational background.

In 2006, Natalie Alyn Lind made her acting debut through the series One Tree Hill playing the role of  Alicia. She next starred in the 2008 television show Army Wives. In 2010, Lind starred in numbers of movies and television series including, Criminal Minds, November Christmas etc.