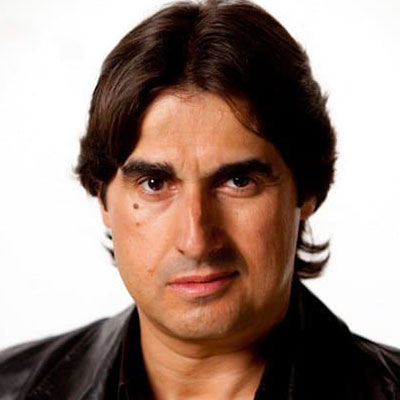 Nicholas ‘Nick’ Giannopoulos is a multitalented personality. He is particularly known for his stand-up comedy stage show, Wogs Out of work. Giannopoulos can also be seen in the movie, The Wog Boy.

Nick is known rumored for his affair with rumored girlfriend, Jackie Henderson very briefly. He is currently dating girlfriend,  Natalie Neville, famously known as DJ Femme. Nick says that they met at a party in St Kilda and are very much in love. Let’s know all about Nick’s personal life, early life, education, net worth, career, salary, relationship, affairs, couple, marriage, and much more.

Nick Giannopoulos is of Greek ethnicity. Nick was born in Melbourne, Victoria, Australia on July 1st, 1963. Nick moved through many schools in his childhood. He went to Abbotsford Primary School & Richmond High School but completed his high school certificate program from Taylors College in 1980.

Born in an immigrant family, Nick Giannopoulos spent a major part of his childhood in inner suburbs of Fitzroy & Richmond, Melbourne.

In 1981, Giannopoulos got enrolled in the Rusden State College. While in Rusden, Nick majored in Media Studies majoring in Film. But Giannopoulos left his course midway after he was accepted into Drama School at the esteemed Victorian College of The Arts.

Nick graduated from Victoria College of Arts in 1985 with a bachelor’s degree in Dramatic Arts.

Nick’s professional career few years after he was graduated. Giannopoulos’s caught his break from Wogs Out of Work which is he known to co-written and produced. Wogs Out of Work’s primary subject was an ethnic comedy.

Giannopoulos toured Australia from 1987-1990. Due to Wogs Out of Work’s massive success, Nick followed up his masterpiece with Wog Boys, Wog-A-Rama and Wog Story stage shows. His Australia tour was always booked and full house and has still successfully maintained its status for being the highest Grossing Australian live comedy shows of all time.

The versatile comedian, during his tour also dabbled his hands on small screen. Nick is credited with co-writing and creating the hit Australian sit-com Acropolis Now. The sitcom lasted for 5 long seasons with 63 episodes from 1989 to 1992. Nick was one of the cast in the show.

Nick Giannopoulos has worked in three feature film, The Wog Boy, The Wog Boy 2 and The Wannabes. Nick has done a cameo appearance in the Fat Pizza vs Housos. The Wog boy, till to this date remains as one of the highest grossing Australian movies ever.

Nick was born three years later his parents immigrated to Australia and grew up in financially challenged settings. He recounts being bullied in Richmond High where his mates called him Wog.

Nick was thrown off his High School and also from Rusden College after two years. He came precariously close to being thrown out of Victorian College of Arts too but was saved by one of the teachers after he vouched for Nick.

Nick has been known to date girlfriend, Jackie Henderson very briefly. He is currently dating girlfriend, Natalie, famously known as DJ Femme. Nick says that they met at a party in St Kilda and are very much in love.

The stand-up comedian’s net worth is speculated to be around $6 million USD. Nick’s movie The Wog Boy grossed $12 million dollars and all of his works are estimated at around $20 million dollars. He owns 2018 Mustang GT 5.0L worth $36,000 USD.

Nick Giannopoulos has bagged two Mo Awards for the Best Comedy Performer of the year in 1998 and 1999 simultaneously. He has also won the Comedy Star of The Year Award in October 2012.