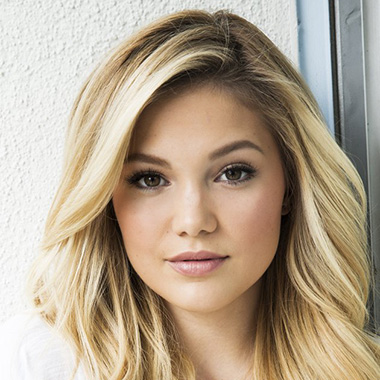 Olivia Holt is a gorgeous and beautiful American teen actress and singer. She is mainly known for playing in the Disney series Kickin’ It as the role of Kim. She also has starred in the original movie of Disney Girl vs. Monster. She is currently the star of Disney Channel Series I Didn’t Do It.

Olivia was born on August 5, 1997, in Germantown, Tennessee, United States. She was born to Mark and Kim Holt. Her birth name is Olivia Hastings Holt. She also has an older sister named Morgan. Morgan was born on December 27, 1990. Her younger brother name is Cade. Cade was born on July 16, 2001. She with her family moved to Nesbit, Mississippi and was raised in Memphis, Tennessee. She was only three years old then. She loves doing cheerleading and gymnastics. She is currently the star of Disney Channel Series I Didn’t Do It. She currently with her family lives in Los Angeles, California. She goes to culinary school.

She started her acting career by performing in local theatre productions. She was also seen in many television commercials which include Kidz Bop 14, Bratz dolls, Hasbro, Girl Gourmet products, Littlest Pet Shop and Mattel. She then auditioned for Disney martial arts show Kickin’ It. It premiered in 2011. Because of her skills in gymnastics, she was liked by the producers and got the call from them and joined the cast in the same year. From 2011 to 2014 she acted as the role of Kim. She then starred in the Disney original film Girl vs. Monster. She in the movie played as the lead character Skylar Lewis. Skylar is a teenage girl that discovers her family has worked as monster hunters and she did the same job as her parents did. The film was premiered in October 2012.

She also recorded three songs for the movie which released as part of the Make Your Mark: Ultimate Playlist. She then in 2012 recorded Winter Wonderland for the Disney Channel Holiday Playlist album. She is currently working as the star of the Disney Channel show I Didn’t Do It with Piper Curda and Austin North. In the summer of 2013, the production of the show began. The show first aired in 2014. She then announced on October 7, 2014, that she officially signed a record deal with Hollywood Records.

In 2013 she was awarded Radio Disney Music Awards in the Best Crush Song category with nominee Had Me @ Hello. In the same year, she was nominated for Shorty Awards for Best Actress in the nominee Kickin’ It.

She is also called by her nickname as Liv or Livy. Her zodiac sign is Leo. She holds an American nationality. She is a slim build. Her height is 5 feet and 2 inches weighing 53 kg of normal weight. She was rumored of dating Kickin’ It co-star Leo Howard. She then dated co-star of Girl vs. Monster Luke Benward. They dated each other since 2012 and the relation is still going. She belongs to the white ethnic background. She has got blonde hair and hazel eyes. Her body measurement is 33-23-32 inches and her bra size is 32B.